Tell us all about your Fitbit Charge 4 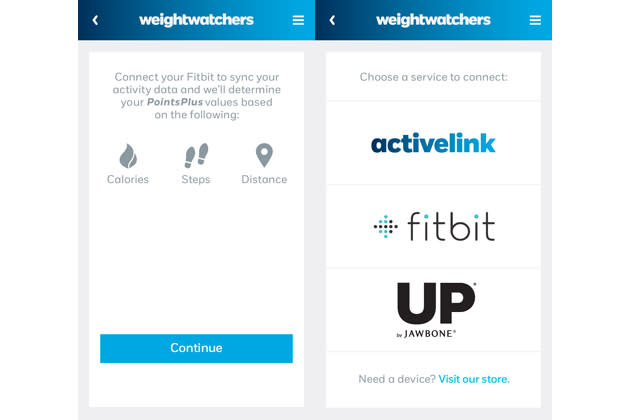 If you've ever belonged to Weight Watchers, you know it's pretty good at logging your food intake. But exercise? Not so much. Unless you use a qualifying pedometer, you have to manually enter your activity, which means calculating how much time you spend walking each day. Finally, though, Weight Watchers is doing the sensible thing: It's integrating its app with fitness trackers, starting with models from Jawbone and Fitbit. So, if you walk an hour while wearing your Up24 or Fitbit Flex, the Weight Watchers app will suck in that data, and convert that activity to Weight Watchers points. (People on Weight Watchers earn a sort of currency, which they can trade in for more food, if they so choose.) As someone who until recently subscribed to Weight Watchers, I can confirm this is good news. Even with so many fitness trackers on the market, WW still has a best-in-class food database; it's simply more comprehensive than anything Fitbit or Jawbone has to offer. And, you know, the program works. That's why people pay for it. But food-logging regimens are harder to follow faithfully when you have to manually enter lots of data and indeed, it can be annoying to type in my 35 minutes of running, when I already logged it with Jawbone.

For now, at least, Weight Watchers will only pull in data from Jawbone and Fitbit, though Weight Watchers says support for other devices is coming soon. Both apps are available for iOS and Android, with iOS 8 support coming soon (iOS 8 doesn't even come out until next week). Also, because the integration works with the help of Apple Health for iOS 8 (available next week), this feature will only available on iPhones and iPads. Weight Watchers declined to say if an Android version is on the way. In the spirit of choice, though, we hope it is.

Update: Looks like we were given some incorrect information. The integration with Jawbone and Fitbit will indeed work on both iOS and Android. Updates to both apps are available now. Go get 'em!

In this article: fitness, mobilepostcross, weight loss, weight watchers, weightloss, weightwatchers
All products recommended by Engadget are selected by our editorial team, independent of our parent company. Some of our stories include affiliate links. If you buy something through one of these links, we may earn an affiliate commission.