Aspirational action: How GoPro makes you want a GoPro 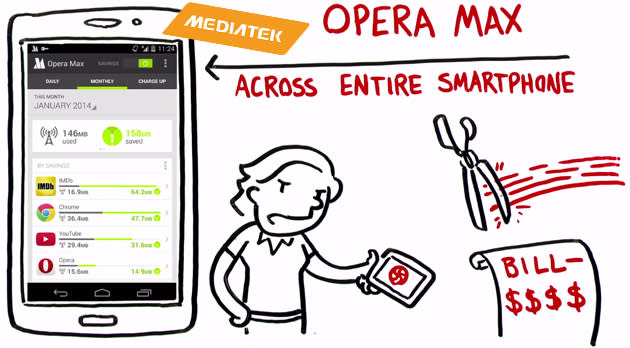 While Opera Max is slowly making official launches around the world, this cloud-based data-compression service has just nabbed another partner -- and it's a pretty big one, too. Today, the Norwegian company announced that MediaTek will be embedding its app in two of its LTE-enabled 64-bit chipsets: the octa-core MT6752 and the quad-core MT6732. What this means is that should manufacturers want to integrate Opera Max into their MediaTek-powered devices (our understanding is that this feature is optional), they wouldn't have to spend time on testing the app, ergo shorter time to market. And of course, the end user gets to load pages, music and video clips faster anywhere on the device (unlike how the Opera browser only compresses data that are loaded within it), while also saving "up to 50 percent" of bandwidth, courtesy of Opera's cloud servers. That said, the service doesn't process encrypted links, for obvious reasons. For those who aren't familiar with Opera Max, feel free to check out the new video after the break.

In this article: max, mediatek, mobilepostcross, MT6732, MT6752, opera, operamax, video
All products recommended by Engadget are selected by our editorial team, independent of our parent company. Some of our stories include affiliate links. If you buy something through one of these links, we may earn an affiliate commission.