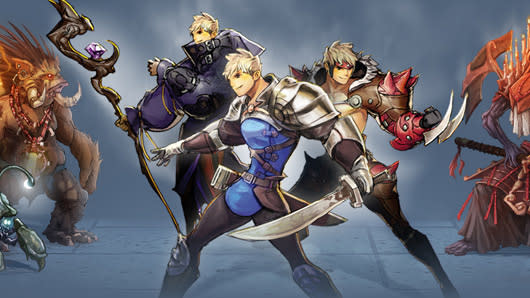 French developer Kobojo has assembled a team of Final Fantasy series veterans for Zodiac, an upcoming multiplayer online RPG for iOS platforms and the PlayStation Vita.

PARIS, TOKYO and DUNDEE, Scotland - Sept. 19, 2014 - Kobojo, the French developer creating engaging, multi-platform games with an artistic flair for mid-core players, today announced details for Zodiac, a 2D persistent online role-playing game (RPG) developed in conjunction with creative minds from the smash-hit Final Fantasy franchise. The game is being unveiled to the public for the first time this week on PlayStation® Vita and iOS devices at the Tokyo Game Show.

"Working with iconic developers such as Sakimoto-san and Nojima-san has pushed us to perfect every element of the RPG experience for mobile and handheld devices," said Mario Rizzo, CEO, Kobojo. "The combination of their deep knowledge and history along with our company's experience and artistic style is leading to the creation of Zodiac, our dream cross-platform RPG."

Zodiac blends classic elements from Japanese RPGs with beautifully 2D hand drawn art, creating a gameplay experience that is as deep and engaging as it is stylish.

Zodiac is being developed at Kobojo's new studio in Dundee, Scotland and is set to be released in 2015.

Kobojo was founded in 2008 as a social game developer, focusing on city builder and casual game genres for the Facebook platform. In 2013, the company transformed - concentrating on creating accessible, artistic and engaging RPG experiences for touch devices. The first game under this new vision, free-to-play multi-platform RPG Mutants: Genetic Gladiators, debuted on Facebook and mobile devices to global success.

Kobojo develops engaging, online RPG titles which are designed for touch devices. The company is passionate about developing high-quality multiplayer game mechanics and is known for its extraordinary hand-drawn 2D graphics. It has created and is currently managing Mutants: Genetic Gladiators, Atlantis Fantasy, Goobox and Pyramid Valley. Kobojo is a private company, founded in 2008, with headquarters in Paris, France and a new development studio in Dundee, Scotland.
In this article: hitoshi-sakimoto, ios, ipad, iphone, kazushige-nojima, kobojo, mobile, playstation, playstation-vita, vita, zodiac
All products recommended by Engadget are selected by our editorial team, independent of our parent company. Some of our stories include affiliate links. If you buy something through one of these links, we may earn an affiliate commission.