Bono apologizes for that U2 download you didn't ask for 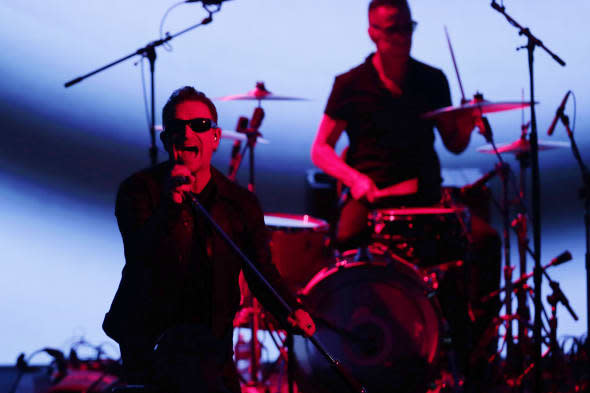 Over the weekend, U2 frontman Bono sat down for an interview with Dave Fanning on the Irish radio station 2FM where the two discussed a wide range of topics. While the interview mostly centered on the band's new album, Bono took some time to touch on a few Apple related items.

And if there's one thing Bono isn't, it's boring.

With respect to the backlash resulting from Apple making U2's new album Songs of Innocence available for free to iTunes users, Bono was quick to brush off any criticism.

The same people who used to write on toilet walls when we were kids are now in the blogosphere. The blogosphere is enough to put you off of democracy [laughs]. But no, let people have their say. Why not? They're the haters, we're the lovers, we're never going to agree.

Bono explained that the entire point of the promotion was to get the album heard by as many people as possible and that it was mission accomplished. The album has already been downloaded by 77 million users and the band's Singles album is now in the top 10 of 14 different countries, all thanks to the Apple deal.

As for the backlash, Bono expressed that it was all overblown.

Yes, it worked, and the only thing was this technological blip which was for some people [the album] didn't just stay in the cloud, it hopped into their phone. Apple is very sorry about that. They sent people a way to delete it. It's wonk. I mean, really. Come on.

I can say to them, no one has deleted more U2 songs in the last 5 years than the 4 members of U2.

Later in the interview, Bono even likened the band's deal with Apple to punk rock, explaining that the point of punk rock was to be "in your face" and that punk rock back in the day thrived on being right there in front of you even if you weren't looking for it.

As for reports that Apple and U2 are working on a new type of music format to increase music sales, Bono during Sunday's interview shed a bit more light on the matter.

But to really break this open, why can't we see what we're looking at. Why can't we dip into artwork. like we used to? Why can't I use my phone or my iPad to disappear into a world created by artists with photography? If we want to listen to Miles Davis in a silent way, why can't we have the photographs of Herman Leonard playing in the background while we do it? Or, with another click find out what mood he was in when he made that? Or with lyrics, why can't we read Bob Dylan's lyrics while we're listening to his music at a certain point in time?

Interestingly, the new artistic-themed music format Bono is so jazzed about will, according to him, include high-res studio master downloads to boot. And truthfully, it's not a bad idea. But it sure sounds awfully similar to iTunes LP, an interactive album format from Apple which never quite impacted music sales in a discernible way. Of course, the utility of iTunes LP was limited insofar as the content was only viewable from within iTunes and on the Apple TV. iTunes LP on iOS would likely be much more impactful.

Also of note is that this music format is supposedly years in the making. In fact, Bono claims the idea stretches all the way back to 2009 and had the blessing of Steve Jobs.

So 5 years ago I began a conversation with Steve Jobs at my house in France and I said to Steve: "How is it that for a person who cares about the way things look and feel more than anyone else in the world that iTunes looks like a spreadsheet?"

He was not happy. That was before they managed to even get a full screen photograph up.

So he made a promise to me that we would work on this together, and with the team at Apple we've been doing it for years, and it's not ready yet for Songs of Innocence, it will be ready for Songs of Experience. And it's very exciting. And it's a new format, and you can still get the Mp3 format, and you can rob it or whatever you want but you won't be getting the full experience. It'd be like you walking down the streets in Dublin in the 70s with a copy of the Rolling Stones album Sticky Fingers; just the vinyl, and not the Andy Warhol designed sleeve. You wouldn't feel like like you had the proper package.

Another interesting tidbit: Bono gave us an update as to the total number of iTunes accounts. The last time we received an official figure from Apple was this past April during an earnings conference call when Tim Cook boasted of 800 million accounts.

According to Bono, that number today stands at 885 million. And while we have no confirmation from Apple, it stands to reason that Bono, thanks to U2's recent deal with Apple, is likely to be aware of the most up-to-date figure.

"They have 885 million iTunes accounts," Bono told Fanning, "and we're going to help them get that number to a billion."

Bono ventured on to discuss the music streaming business model, emphasizing that it's a great way to get musicians paid for their work.

[One billion users is] 1/7 of the earth's population. If 1/10 of those people were to be part of a subscription service like Spotify has, and I'm a huge Spotify fan, at $10 a month... Do the math. That's a billion a month. That's $12 billion dollars. That's bigger than the entire music business coming out of one company. Even if it was 5%, now musicians are suddenly in a game that people are ready to pay for, their lives are changed.

And forget about touring bands, what about the songwriters? Cole Porter, where would he be now? He didn't sell t-shirts... so that thing that U2 is for free music is bollocks or people who are too blind to read the newspaper properly.

On the streaming front, we're still waiting to see how Apple plans to integrate Beats Music into its product lineup. Most recently, an Apple TV update introduced a new Beats Music channel but aside from that there's been no news.

Now what would really be interesting is if Apple introduced the aforementioned enhanced album features as part of a $10/month Beats Music subscription. That might be a great way to not only attract new users but to get Spotify users to defect -- a tall task given how many people are used to Spotify and absolutely love the service.

As a final point, Bono discussed briefly why U2 enjoys collaborating with Apple, specifically pointing out that Apple, more so than any other tech company, is concerned with ensuring that musicians are getting paid for their work.
In this article: bono, iTunes, music, u2
All products recommended by Engadget are selected by our editorial team, independent of our parent company. Some of our stories include affiliate links. If you buy something through one of these links, we may earn an affiliate commission.