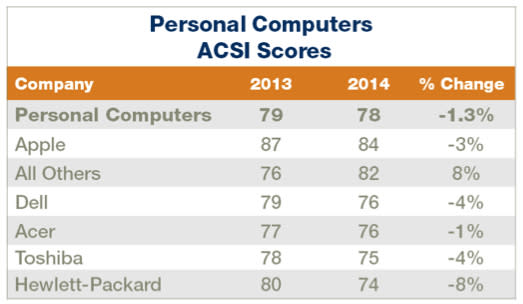 This shouldn't come as surprising news to anyone who has watched Apple's sales figures over the past decade or so, but the company has just ended up at the top of the American Customer Satisfaction Index list for personal computers, laptops and tablets.

This marks the eleventh year in a row that Apple has topped the list, but there was a slightly ominous tone to the numbers as the score dropped from 87 in 2013 to 84 this year. Dell is the second single company on the list with a score of 76, dropping from a 2013 score of 79. HP is now at the bottom of the list of major manufacturers, falling from 80 to 74 in just one year.

Oddly enough, smaller PC and tablet manufacturers including Samsung, Lenovo and Asus are close behind Apple. Those companies make up a group called "all others" and saw a sizable increase in their ACSI score from 76 last year to 82 in 2014.

The ACSI report is available for free (registration required) here.

In this article: ACSI, apple, customer satisfaction, news, personal computers, tablets
All products recommended by Engadget are selected by our editorial team, independent of our parent company. Some of our stories include affiliate links. If you buy something through one of these links, we may earn an affiliate commission.