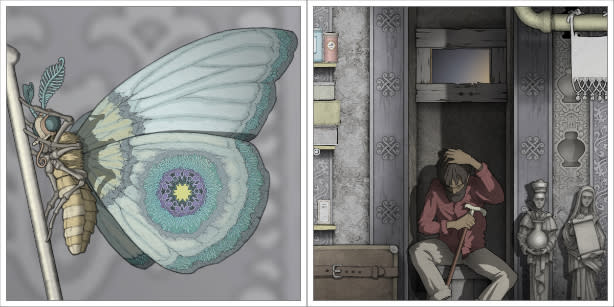 Gorogoa is heralded for its intricate, hand-painted art and unique approach to puzzle gaming, aspects that have earned it the top prize from the Good Game Club in 2013 and an award for Excellence in Visual Art from the 2014 IGF. These have also helped make Gorogoa the next game to receive support and financial assistance from Indie Fund. With the Indie Fund backing, Gorogoa is due out on PC and Mac in early 2015, with a mobile launch to follow.

Gorogoa is the first major release from developer Jason Roberts. On the surface, the game appears to be a straightforward point-and-click puzzler, but it becomes more complex as players pull scenes from one panel into the others, crafting tightly woven stories as they go.

"Gorogoa is just jaw-droppingly beautiful, and this is especially remarkable because it's one person doing the programming, design and artwork," Indie Fund partner Aaron Isaksen says. "If this was a children's book it would win the Caldecott Medal. The gameplay is also quite intriguing; the connections that you make between locations, objects, and visuals is deliciously non-linear in a way we don't experience in the real world."

In this article: android, gorogoa, Indie, Indie-fund, ios, ipad, iphone, jason-roberts, mac, mobile, pc
All products recommended by Engadget are selected by our editorial team, independent of our parent company. Some of our stories include affiliate links. If you buy something through one of these links, we may earn an affiliate commission.