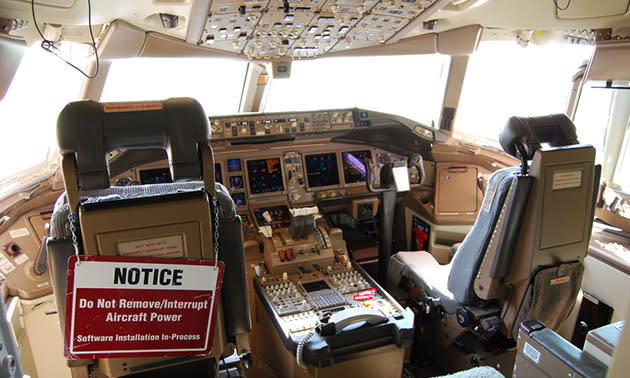 A fleet of 737s and 777s are definitely in line for an upgrade, now that the Federal Aviation Administration has ordered airlines to replace their cockpits' displays with ones not vulnerable to WiFi signals. Let's go back a few years to understand what's going on here. See, back when the use of wireless internet aboard airplanes was only just starting to take off, Boeing conducted a test, which discovered that WiFi signals affected 737 and 777 cockpit displays. These screens, which showed pilots important flight data such as altitude and airspeed, flickered and even blanked out completely in the presence of WiFi. In one particular bad test run, the screen remained blank for a full six minutes.

While that's obviously not ideal, all the outages happened on the ground and only once during last year's round of testing. So Honeywell (the displays' maker) and Boeing just advised airlines to take their planes in and have those screens replaced -- an action the FAA was content with back in 2012. (To note, Boeing has started fitting planes built in September 2012 and beyond with updated displays.) Now the FAA is changing its tune, and Honeywell wants to know what has changed since then that has compelled the agency to make the upgrade mandatory.

We're guessing it's because airlines are becoming more and more open to the use of WiFi devices onboard, not just by passengers, but also by the flight crew itself, and that has raised safety concerns. After all, six minutes of outage could be fatal when you're thousands of feet up in the air. It's unclear how many airplanes will be affected by the mandate at the moment. According to Reuters, though, around 1,300 US planes will have to be refitted with the new screens within the next five years. Since each display costs more than $10,000 each and each plane has several, the upgrade will cost airlines roughly $14 million in total.

In this article: 747, 777, airplane, Boeing, Honeywell, wifi
All products recommended by Engadget are selected by our editorial team, independent of our parent company. Some of our stories include affiliate links. If you buy something through one of these links, we may earn an affiliate commission.