Not quite Google Glass: a week with Epson's awkward smart glasses 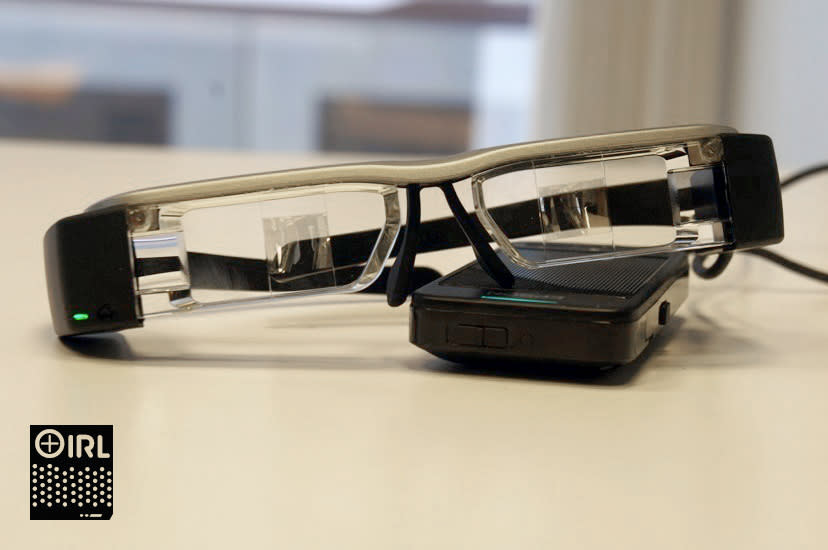 I had the full attention of Engadget's San Francisco office as I unpacked Epson's latest augmented reality headset, the Moverio BT-200. The glasses make for one heavy, awkward wearable: Coke-bottle thick lenses with inlaid transparent displays hovering in front of each eye. My coworkers and I passed them from desk to desk anyway, snapping goofy images for Instagram and musing over what to do with them. The glasses aren't Engadget's typical review fare -- it's not a product intended for consumers, and I wonder out loud how I'm going to explain the lenses to my readers. Without missing a beat, my editor Christopher Trout looks me square in the eye and gives me an answer. "Wear them," he says. "For a week. That's an assignment. You're doing it." Hoo boy. 16
As it turns out, that's easier said than done. If the comparatively subtle frames of Google Glass are enough to cause a social uproar, what kind of hilarious reactions will Epson's spectacles get? Well, more of the same, but with less of an excuse. My trip to the local cafe was met with nervous laughter, general bewilderment and the expected barrage of questions: "Are you recording me? Is that Google Glass?" Yes and no, respectively.

After a moment's awkwardness, I mumbled an apologetic explanation. "It's uh.. I'm testing it for work," I muttered, trying to describe to the confused barista just what an "Engadget" was and why it required me to wear such goofy headgear. "Well," she offered, "you look very... dapper." We both had a good laugh (as did her coworkers) and I read off my wife's drink request from the Moverio's heads-up display: green tea latte, whip cream, no sweetener.

I'd worn Google Glass in public before, but this was different. The Moverio left me feeling self-conscious and embarrassed. As I endured the hushed whispers of other diners, it dawned on me why. It isn't because the BT-200, like all smart glasses, is a glaring faux pas (although it totally is); it's because I had absolutely no reason to be wearing it. Google's wearable is designed to fit into a consumer's daily life: it offers touch- and voice-controlled weather data, navigation routing and notifications from your smartphone. In contrast, Epson's glasses offer a stock Android homescreen in landscape mode and an awkward handheld control unit. So, where does the Moverio fit in? Presumably, where it's designed to: work environments. The unit Epson lent me is outfitted with demo apps designed to assist construction workers, repair technicians, retail managers and even pilots. Some of these were mere concepts -- the pilot app imagined a augmented reality flying experience that highlights runways and draws flight paths in front of the user's vision, for instance -- but others bled with potential utility. There was a Mitsubishi-sourced app that could recognize home appliances and overlay repair instructions, complete with simulated 3D parts, and another application to help retail managers organize shelf layouts.

Most of these apps seemed like good ideas, but none of them applied to my life -- at least until I booted up Scope AR. Technically, Scope AR didn't fit my life either: It's designed to be an augmented reality training solution that teaches the user how to repair an engine, install a carburetor or some other feat that requires specific knowledge. The version of the app Epson gave me, however, was only good for one thing: building Lego helicopters. Truly, this is the future of assembling plastic whirlybirds intended for 5-12 year-old children. Wearing the glasses, I was able to see a digital 3D recreation of my project at the exact step in construction I was attempting to complete. Animated blocks automatically fell into position with each step, wordlessly showing me exactly what I needed to do. Okay, maybe it's a unnecessarily complicated method for delivering Lego assembly instructions, but it made the task ridiculously easy and more fun to boot. The experience sold me on Epson's pitch for an augmented workplace. Unfortunately, I had a hard time finding a place for the glasses outside of that imagined future. To be fair, Epson warned me its smartglasses weren't designed for consumers. They're a little heavy, hard to control and have an aggravating tendency to give me headaches, enough so that I failed in my mission: I couldn't wear them on a daily basis without feeling sick. Still, once I stopped thinking about the Moverio as a Google Glass competitor and recognized it as an enterprise device, its potential was easy to see. The right app could make the device an invaluable tool in construction, security, research, travel and countless other industries -- someone just needs to build the right software.

Although my week ended with a reminder I was using a device intended for developers and specific use cases, the potential of the product in the consumer space still lingers. No, you're never going to buy the Epson BT-200 as a personal toy, but you might see its technology embedded in something you'll buy in the future. A few months ago I encountered a startup called FUSAR Technologies, a company using Moverio optics to design an augmented reality motorcycle helmet. Think of it: riding down the freeway with a virtual rear-view mirror hovering conveniently in your peripheral vision, perhaps flanked by a speedometer readout. Just like the enterprise demo apps, it uses the smartglasses to improve a specific situation in a specific way. Augmented reality may not be ready for primetime just yet, but I'm looking forward to when it will be.

In this article: BT-200, engadgetirl, epson, epson Moverio BT-200, epsonMoverioBT-200, glasses, irl, moverio, Moverio BT-200, MoverioBT-200, smart glasses, smartglasses
All products recommended by Engadget are selected by our editorial team, independent of our parent company. Some of our stories include affiliate links. If you buy something through one of these links, we may earn an affiliate commission.