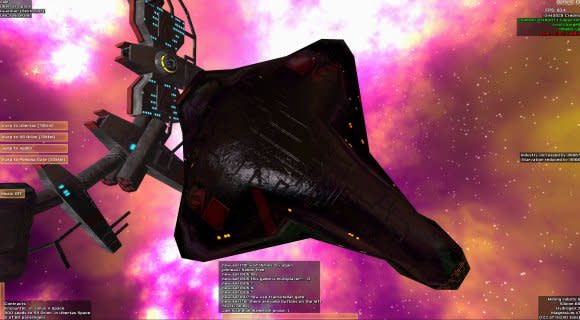 When we last checked in on Ascent: The Space Game, the indie sci-fi sandbox MMORPG was already eminently playable, having launched on Desura and angling for a Steam greenlight. Now Fluffy Kitten Studios has posted a Kickstarter intended to fund specific upgrades for the game -- specifically, improved graphics and UI. In fact, the complete budget breakdown is provided on the Kickstarter page. Backer rewards include premium access time, credits, Steam keys, and ships. You could even get a planet named after you.

The Ascent sandbox emphasizes freedom, colonization, exploration, trade, combat, farming, mining, ship customization, starbases, and co-op play with fully consensual PvP. The Kickstarter boasts of the game's 270 billion star systems. Massively spoke to James Hicks, founder and CEO of Fluffy Kitten Studios, back in April, when he explained to us his business model, his target audience, and how he's come so far by himself. As he put it then, "Have a look at what we've done, with one developer, in one year, on a shoestring budget for art, music, and sound. Do you want to see what we can do in another year, with more?"

In this article: ascent, ascent-the-space-game, colonization, consensual-pvp, crowdfunding, graphics, james-hicks, kickstarter, mmorpg, pve-sandbox, sandbox, sci-fi, space, space-mmo, space-sandbox, steam, steam-greenlight, ui
All products recommended by Engadget are selected by our editorial team, independent of our parent company. Some of our stories include affiliate links. If you buy something through one of these links, we may earn an affiliate commission.