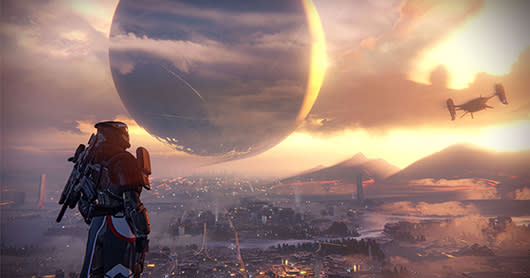 In Destiny's latest letter to the playerbase, Bungie Community Manager Deej says that a looking-for-raid tool might be on the table. "You've been heard," he tells a player asking for raid matchmaking. "We're having conversations about how Matchmaking might support the more challenging activities in Destiny." He suggests that PUGs for dungeons thought mostly un-PUGgable are already happening.

You don't need to sell us too hard on the value of Matchmaking at Bungie. It's something we helped to pioneer. Yet, we understand its limitations. In the recipe of a Bungie game, Matchmaking has always contributed the ingredient of a team built to play one match of competitive multiplayer. As you've probably witnessed in recent weeks (or years), many of those fresh allies have failed to go the distance together.

The Raid was designed for solid teams of killers who have made a commitment to solve a dense and explosive riddle. Most of the raiding parties who have emerged victorious from the Vault of Glass have sworn that one weak link would have doomed their chain. There have been other stories, of course. We've heard tell of Guardians who met each other just outside the door that leads into that vault. Strange tales have reached our ears - tales of total strangers who have banded together to see the Raid all the way through to a triumphant finale.

After announcing that he wouldn't be fielding queries about rumors, Deej also addressed the companion app, factions, feedback, and class balance. "The next batch of enhancements, refinements, fixes, and tweaks," he says, will be released "very soon."
In this article: bungie, console, deej, destiny, lfg, lfr, raid, raid-tool, sci-fi, shooter
All products recommended by Engadget are selected by our editorial team, independent of our parent company. Some of our stories include affiliate links. If you buy something through one of these links, we may earn an affiliate commission.