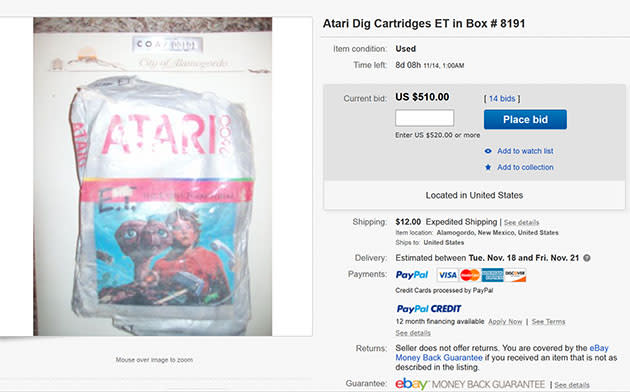 Normally we'd advise you to avoid terrible games, but here's one you might want to get your (gloved) hands on. E.T., the game that killed Atari and was famously unearthed in April at a landfill in Alamogordo, New Mexico, is now up for auction. To remind you, the existence of the ditched cartridges had been an Atari urban legend until a Microsoft-sponsored dig project proved the rumors true. Alamogordo's Tularosa Basin Historical Society, which arranged the excavation and owns the cartridges, put 99 of them up on eBay, each with a certificate of authenticity.

Not surprisingly, some of the less-tattered E.T. cartridges have already been bid up to $500, while other titles like Asteroids, Missile Command and Star Raiders are going for $50 (which is ironic, since they were much better games). The Historical Society plans on keeping 500 of the titles for itself and giving some to the Smithsonian and other museums. The bidding finishes November 13th, but it may auction off as many as 750 more cartridges at a later date. Meanwhile, the Microsoft documentary that resulted from the dig, Atari: Game Over, will air exclusively on the Xbox platform on November 20th. Sadly, that will be one of the last productions from MIcrosoft's now-defunct Xbox Entertainment Studios.

In this article: Atari, Atari 2600, auction, cartridges, e.t., e.t. the extra terrestrial, ebay, garbage dump, Landfill
All products recommended by Engadget are selected by our editorial team, independent of our parent company. Some of our stories include affiliate links. If you buy something through one of these links, we may earn an affiliate commission.