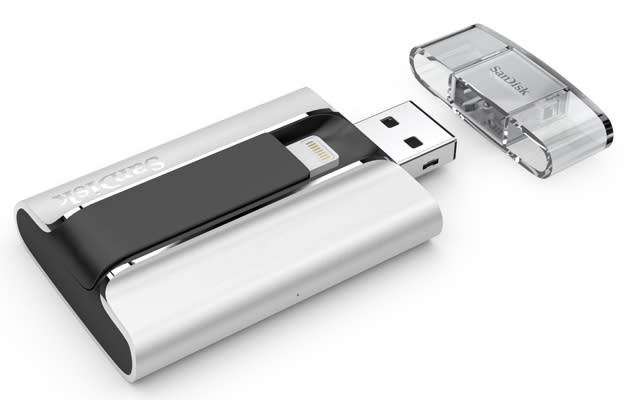 As great as it was that Apple eliminated the 32GB iPhone in favor of a 64GB model, those whose budget could only stretch to the 16GB model are still in need of more storage. There's plenty of wireless flash drives knocking around, but SanDisk feels that its latest iXpand Flash Drive still has something new to bring to the party. Tailored for gear running iOS 7 and 8, the drive either connects via the built-in lightning cable, pushing photos and videos between the two with ease. A companion app will even let you stream AVI and WMV clips on your iPhone or iPad without having to convert it beforehand. The 16GB base model is available for $59.99, the 32GB is a Best Buy exclusive and is priced at $79.99 and the 64GB-er requires $119.99 of your Earth dollars.

In this article: apple, iOS, iPad, iPhone, iXpand, iXpand Flash Drive, mobilepostcross, SanDisk
All products recommended by Engadget are selected by our editorial team, independent of our parent company. Some of our stories include affiliate links. If you buy something through one of these links, we may earn an affiliate commission.