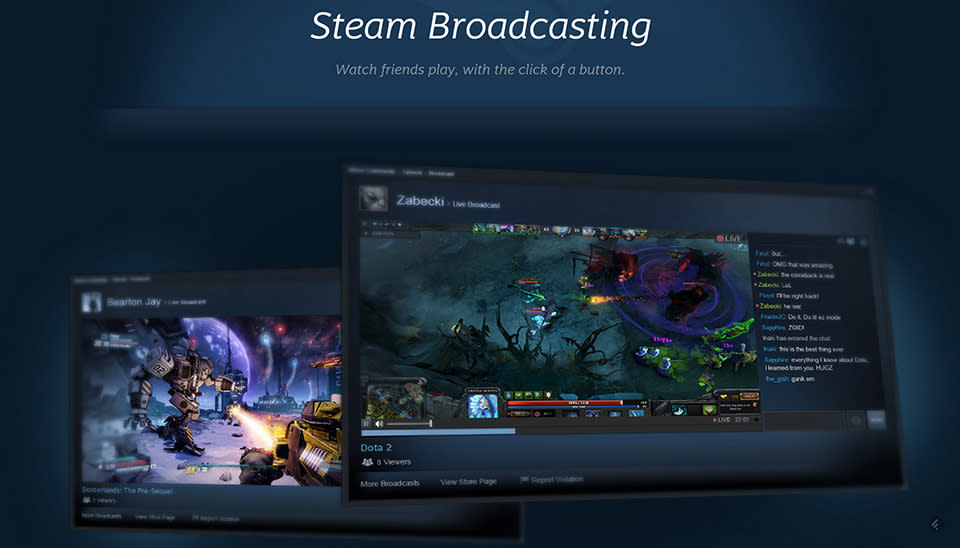 Streaming videos of people playing video games is big business. Right now though, there isn't much competition -- Twitch pretty much dominates the scene. But, if there's one company that can topple the king it's Valve. Today it took the wraps off Steam Broadcasting, which will allow you to tune into any game your friend (or a complete stranger) is playing with the click of a button. And, by extension, it lets you stream to anyone you like, without the need for a third party app or service. All you do is visit a person's profile and if they're currently slinking their way through Alien: Isolation you'll be able to click "Watch Game" and witness them get disemboweled after making a wrong turn. Obviously, you can also choose to keep your game play private or limit spectators to your circle of Steam friends. Those options will pop up the first time someone asks to watch a game. Though, you can always choose to change those settings later on. Steam Broadcasting is in open beta right now, which means anyone who wants to can participate, though Valve says it may restrict the number of concurrent viewers as it scales up to a proper release.

In this article: steam, steam broadcasting, streaming, twitch, valve, video games
All products recommended by Engadget are selected by our editorial team, independent of our parent company. Some of our stories include affiliate links. If you buy something through one of these links, we may earn an affiliate commission.