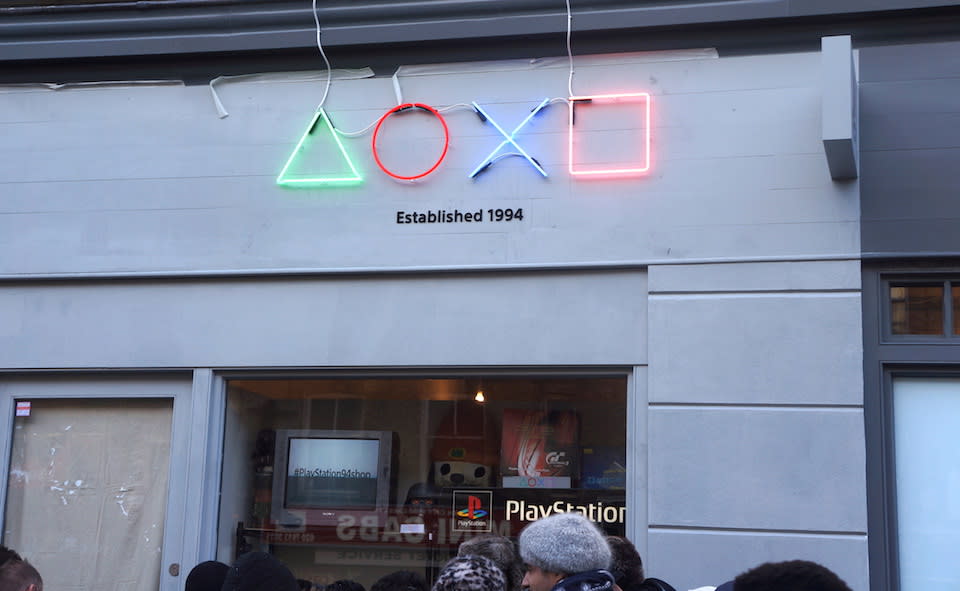 It's 10:30am on a cold Wednesday morning. A small crowd gathers outside an unassuming grey shop in the middle of Bethnal Green Road, London. Four multi-coloured neon symbols suddenly come into view -- it's 1994 all over again and I'm suddenly feeling nostalgic.

It's been hard to miss, but it's been two decades since the OG PlayStation went on sale. To celebrate, Sony's returned to its retro roots, and the gaming public are loving it. It started with the unveiling of the 20th Anniversary Limited Edition PS4, which sold out in minutes in the US, moving on to a retro-inspired theme for PlayStation 4, PlayStation 3 and PS Vita owners. To mark the console's UK launch, it's opened this new pop-up PlayStation store in Central London.

Unlike in the US, Sony decided it didn't want to open online sales for the limited edition PlayStation 4. Instead, it put 94 consoles aside and invited Londoners to find and camp outside the PlayStation '94 Store for a chance to grab a slice of Sony nostalgia for just £19.94 (with all proceeds going to gaming charity GamesAid). To keep a retro feel, gamers were asked to bring at least one piece of PlayStation memorabilia with them -- be it a PSone controller, old Metal Gear Solid poster or a game -- and utter the secret passphrase: "I crashed my Bandicoot."

Unless you live in London and happen to have a free schedule, it's likely you won't get to experience the nineties throwback experience that Sony has cooked up. Fortunately, I was able to take that hit for you, so I paid a quick visit to the store to see what it was all about, meet the first customer and indulge in some celebrity spotting too.

Stepping back in time

When you walk inside the PlayStation '94 Store, it's like stepping back into your local video shop from back when you were a kid. Old posters adorn the walls (did you spot the creepy PlayStation 2 girl?), while life-sized gaming figurines and console demo units line the walkways. There are hundreds of PlayStation games in their old wrappers in bargain baskets and on numerous shelves. Cabinets show off games memorabilia, old consoles and accessories, all of which can't help but display their age. When Sony teased its pop-up shop late last night, gamers immediately started lining up outside. The first person to locate the store was David Stockley, an iOS developer for Bloomberg, who waited nearly 16 hours to get the VIP treatment when Sony opened the doors at 11am. TV presenter Jonathan Ross also popped in to see what was going on.

@PlayStationUK Fantastic to be the first one to get a 20th Anniversary PS4 in the UK. Amazing! Thank you!

By the time I left, Sony had already sold a handful of the 94 limited edition PlayStation 4 consoles. Those who couldn't get the £19.94 deal but were lucky enough to be added to reserve list can go back tomorrow and Friday to bag one of 50 full price units (one batch on each day). If you live outside of the capital and want to snag yourself an early Christmas present, there's still a way to get your hands on one. Sony says it'll open online orders on Monday, but has yet to say how many units will be available. However many there are, you'll still need to move quickly, as they're likely to sell out in minutes.