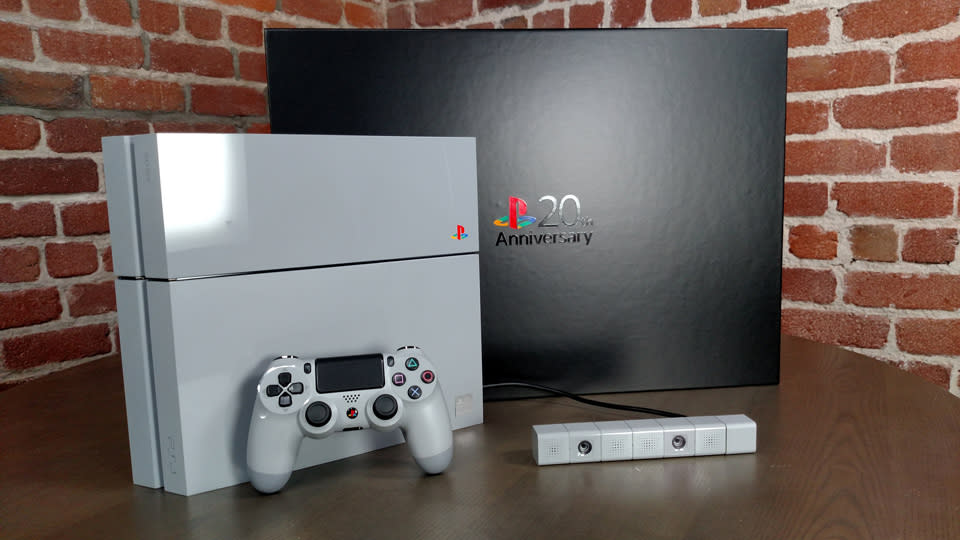 Anyone that remembers the glory days of Sony's first PlayStation console won't find it hard to look fondly upon the recently revealed 20th Anniversary Limited Edition PS4. Marking two decades since the OG PlayStation launched, Sony's also released a retro-inspired theme to pluck at the nostalgia strings of PS4, PS3 and Vita owners. But, nothing does it with quite as much skill as the new hardware itself, which will also go on sale in the UK tomorrow (December 10th), with a few very big catches.

Read: We took a tour of Sony's PlayStation '94 Store

Instead of just opening up online orders like it did in the US, Sony wants its first UK launch to be a more intimate affair. That's why it's opened a "PlayStation '94 Shop" on Bethnal Green Road in London, which will sell the limited-edition console to 94 fans for just £19.94, with all proceeds going to gaming-related charities. However, it's not quite as simple as just turning up. According to Sony, you'll also need to take one piece of PlayStation memorabilia -- a PSone controller, a retro Spyro poster or anything PlayStation-related from the nineties -- to get in the door when it opens at 11am. If you manage to get that far, you'll then need to utter the secret passphrase: "I crashed my Bandicoot."

Of course, Londoners are likely to snap them up pretty sharpish. So on December 11th and 12th, the shop will sell 50 retro PlayStation 4s at the very un-limited-edition price of £399 (roughly £40 more than you'd expect to pay for a standard PS4 and Eye). Unfortunately, if you don't live or work in the city then you're right out of luck, at least this week. Nevertheless, Sony will also open online orders for the console on Monday (December 15th) -- with only 12,300 limited edition consoles being sold globally, they're gonna go quick.

Can't join us? Stay tuned for more further 20th Anniversary activities where you can purchase online starting from Monday!

In this article: hdpostcross, playstation4, ps4, sony, sonyplaystation4, sonyps4, uk-feature
All products recommended by Engadget are selected by our editorial team, independent of our parent company. Some of our stories include affiliate links. If you buy something through one of these links, we may earn an affiliate commission.