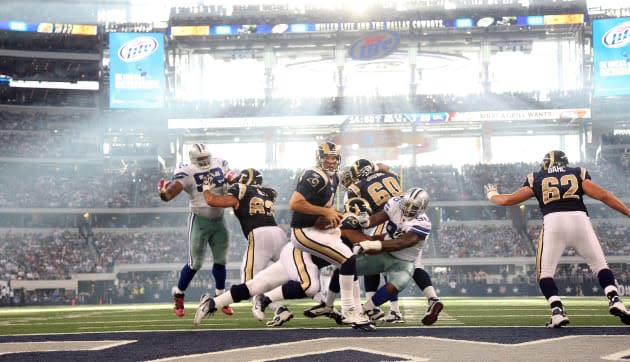 Ready for some in-your-face(book) football? According to the WSJ, Facebook is now showing NFL news, highlights and fantasy info in US feeds, topped off by clickable Verizon ads. The social network said the new arrangement was a "small video sponsorship test ... to evaluate how people, publishers and marketers respond to co-branded video content on Facebook." Facebook has made a big video push recently by courting YouTube stars, adding counters and launching video ads. NFL clips will no doubt give those efforts some extra prestige and help parry Twitter, which recently scored its own curated content deal with the NFL.

Though Facebook played down the arrangement, it's a pretty big deal -- the NFL is notoriously stingy with content, as anybody who's tried to find it on YouTube knows. And it could be just a start for Mark Zuckerberg's crew -- Re/Code says that it's "deep in discussions" with the NBA too. Though still dwarfed by YouTube in video revenue, Facebook gets a billion views per day, and its older demographic may suit the NFL better (the league has no deal with YouTube for now). It also collects tons of user browsing data to better target advertising. Given that, expect more and more Facebook video ads geared to your interests -- but hey, at least there's no YouTube-style pre-roll (yet).

In this article: Ads, facebook, Football, marketing, NFL, Verizon
All products recommended by Engadget are selected by our editorial team, independent of our parent company. Some of our stories include affiliate links. If you buy something through one of these links, we may earn an affiliate commission.