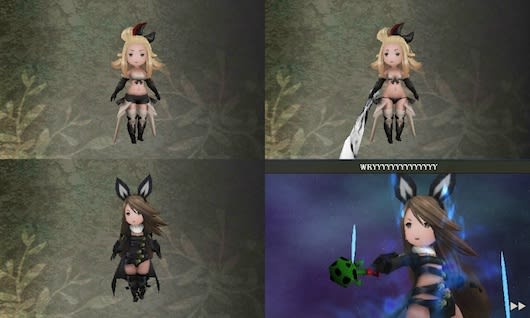 North American 3DS owners won't be graced with the presence of Bravely Default until February 7, but someone with a European copy of the game has noticed changes to outfits and ages of certain characters. The above image was posted by an IGN forum member and showcases the same outfit in different versions of the game, with the Western release's outfits being on the left side.

The Final Fantasy Wiki also notes a boost of three years' age for the protagonists, making Bravely Default's youngest stars like the above Edea 18 years old instead of 15.

Of course, tweaking content during a game's journey to Western audiences is nothing new. The sprite for Siren was covered up in the US release of Final Fantasy 6, for instance. The age bump might also be an effort to avoid problems like those experienced by Dead or Alive: Dimensions, which was not released in parts of Europe due to some of its cast being underage while appearing in risque situations.
Via: Eurogamer
Source: IGN
In this article: 3ds, bravely-default, bravely-default-flying-fairy, censoring, changes, nintendo
All products recommended by Engadget are selected by our editorial team, independent of our parent company. Some of our stories include affiliate links. If you buy something through one of these links, we may earn an affiliate commission.