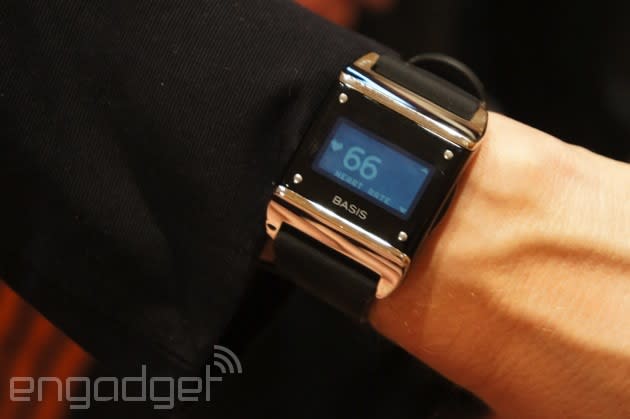 Basis' new fitness band, dubbed the Carbon Steel Edition, is much more comfortable than the original. And that's not just me parroting the company's marketing materials: I've been testing the original B1 band for weeks now, so I should know better than anyone how much better this new one is. Though the press materials would make it seem like this is basically the old B1 with a new wristband, it's now covered in chrome accents (can you really call a faceplate an "accent"?). So, while the overall shape remains the same, and though the screen still has a touch-sensitive pins in each corner, it has a more premium look than it did before. It's no Pebble, to be sure, but it's nonetheless a step in the right direction.

Even without that metal overcoat, though, this would have been a big improvement if only thanks to the wristband. In brief, it has a much softer finish than the rubbery plastic used in the B1. It rests more comfortably against the skin, and is stretchier too, allowing for a snugger fit. Even some retooled hinges allow the band to curl around your wrist a little more naturally. I can't overstate how important that is: right now, I barely even take advantage of the B1's sleep tracking capabilities because by the time bedtime rolls around, I've grown weary of having an uncomfortable band strapped to my wrist.

That posher design aside, the Carbon Steel Edition offers the same features as the original B1, which is to say it monitors sweat output, heat dissipation, blood flow and heart rate, and can automatically tell when you're started walking or running. Now, the accompanying app is about to get updated so that it shows more detailed information about your sleeping habits, including how much time you spent in light and deep sleep, and how often you tossed and turned throughout the night.

We got a quick glimpse at the forthcoming app here at CES in Las Vegas, and appreciated the clean design, especially the color-coded graphs that make it easy to understand when you were in REM sleep versus light sleep. The graphs also let you scroll through to see even more detailed information about your sleep at different points during the night. Our only question? What will Basis do to reward users for consistent sleeping habits? As is, the app is simple and easy to use, but doesn't offer much in the way of motivational support.

In this article: basis, basiscarbonsteeledition, carbonsteeledition, ces, ces2014, hands-on
All products recommended by Engadget are selected by our editorial team, independent of our parent company. Some of our stories include affiliate links. If you buy something through one of these links, we may earn an affiliate commission.