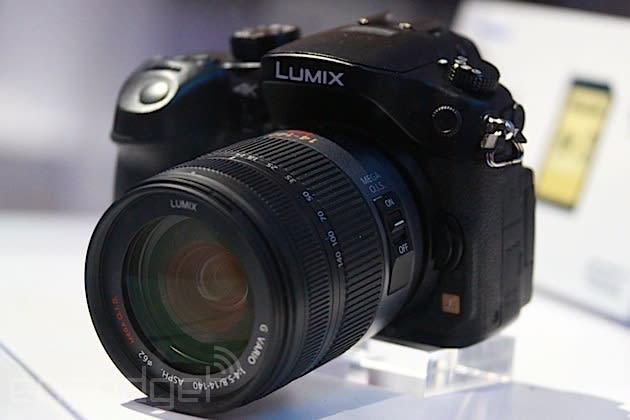 With plenty of 4K displays in Panasonic's booth, it's appropriate the firm's finally shown off a camera in its GH line that records 4K video. The company's keeping most of the hardware's specs close to its collective vest, but a representative was able to divulge a few details. UHD content can be recorded at 200 Mbps, and output in a full live feed via a mini-HDMI port (thanks to ALL-I Intra mode) to display on a computer or record to a hard drive. Of course, the Micro-Four Thirds shooter can save footage straight to an SDXC card -- a UHS Class 3 prototype variant tuned for such a task was on display -- though space will run out fairly quickly.

There's no word how many megapixels the cam totes, but it will be able to simultaneously snap photos while recording video. More details are set to arrive with the camera's official release in late February, when it'll arrive with a price tag of $2,000 or less. In the meantime, look out below for a glimpse of the shooter in the gallery.

7
In this article: 4K, camera, eyes-on, G4, G4K, GH, hands-on, Panasonic, PanasonicG4, PanasonicG4K, photos, pictures, UHD, video
All products recommended by Engadget are selected by our editorial team, independent of our parent company. Some of our stories include affiliate links. If you buy something through one of these links, we may earn an affiliate commission.