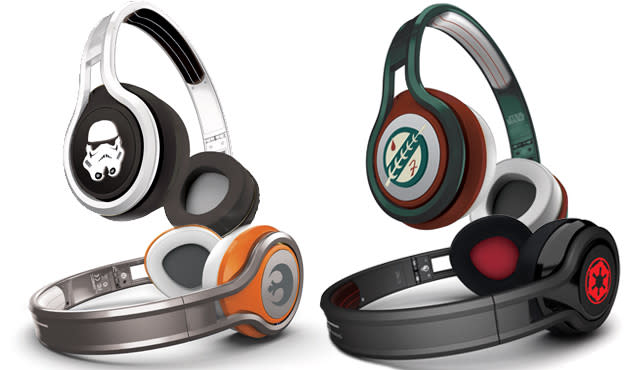 [Cantina Band plays in the background] In a collaboration, we'll admit, we weren't expecting, 50 Cent has teamed up with Lucasfilm to release a series of Star Wars-themed headphones. Based on 50's existing Street design, the new line includes Stormtrooper, Rebel Alliance, Boba Fett and Imperial editions. We know what you're thinking -- where's the Leia-inspired cans? The new range is said to be available for a limited time only, and will come with a certificate of authenticity, along with some in-the-box Star Wars goodies. Once you've decided which side of the Force you're on, you can get yourself a pair for $200 around springtime, ideal for checking out that lost footage on the commute.

In this article: 50 cent, ces, ces2014, headphones, SmsAudio, SMSAudioStarWars, star wars, Street by 50, Street by 50 On-Ear Wired Headphone
All products recommended by Engadget are selected by our editorial team, independent of our parent company. Some of our stories include affiliate links. If you buy something through one of these links, we may earn an affiliate commission.