CableWiFi ties up 50,000 WiFi hotspots for cable subscribers to share 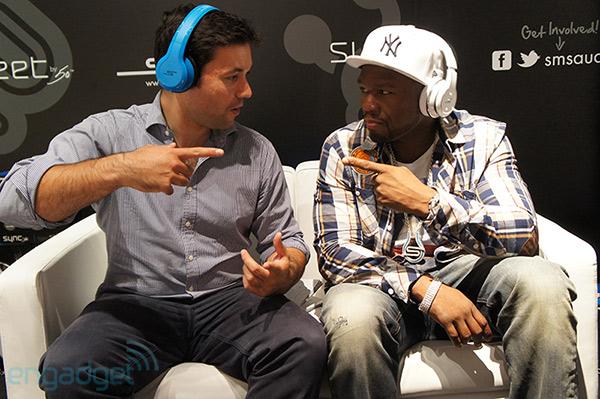 We'd be lying if we told you that we fully expected to be hanging out with 50 Cent when we traveled around the world to Berlin, but earlier today we grabbed a moment with the Queens-based emcee to discuss his venture into the world of high-end headphones. In particular, we wanted to ask how his products, including the new Street On-Ears and Street DJ Pros, stack against some better known rapper-endorsed audio technology -- namely Dr. Dre's gimmicky Beats and his tie-in with HTC.

For starters, 50 was keen to stress that this is no plain endorsement: Studio Master Sound (SMS) Audio is his company and he's invested in it. Regarding the products themselves, he reassured us that they have nothing in common with the Beats / HTC marketing about bringing hardware and software together to create some kind of eardrum wizardry. Instead, he just wants to bring together all-round qualities like durability, comfort, and "professionally tuned" 40mm drivers, alongside fresher styling than you'd get from companies like Bose or Sennheiser.

The booth at IFA was too hectic for us to give the new 'phones a fair run-through, and in fact 50 Cent didn't have a great deal to say about them at this point either. As you'll see in the video after the break, he preferred to hold up his slightly older flagship wireless set, called SYNC, as evidence that SMS Audio has audiophile credentials to justify its high price points. Speaking of which, we're not sure how much the latest models will cost or when they'll become available, but for guidance the SYNC headphones cost $400 while regular Street wired headphones will set you back around $250.


Brian Heater contributed to this report.

In this article: 50, 50 cent, 50Cent, dj pro, DjPro, DjProPerformanceHeadphone, hands-on, headphone, headphones, ifa, ifa 2012, Ifa2012, on-ear wired, sms, sms audio, sms audio dj pro, sms audio street on-ear, SmsAudio, SmsAudioDjPro, SmsAudioStreetOn-ear, street, street by 50, street on-ear, StreetBy50, StreetOn-ear, video
All products recommended by Engadget are selected by our editorial team, independent of our parent company. Some of our stories include affiliate links. If you buy something through one of these links, we may earn an affiliate commission.
Share
Tweet
Share