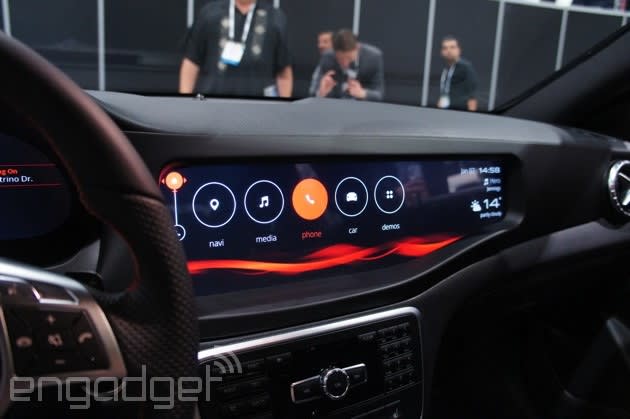 Tucked in a corner of the massive North Hall at the Las Vegas Convention Center is a Mercedes-Benz CLA45 AMG wrapped in flat black vinyl. The only things that stand out about this car are the big red brakes. That is, until you pop open a door and spy the beautiful expanse of touchscreen that extends from passenger door across to and including the instrument panel. QNX has extended on the technology we saw in 2013 with both better-looking panels and a seriously handsome interface. For instance, the system can now run Jelly Bean apps -- as demonstrated by the inclusion of iHeartRadio -- a phone/tablet app that hooks into the system for passenger interaction and full-band duplex stereo vehicle-to-vehicle calling.

QNX also demonstrated its CAR platform's flexibility when it comes to navigation. Rather than just one nav platform, the CLA45 included Elektrobit, Kotei Navi & Data, Aisin AW and Nokia Here to show how the system could be integrated into any vendor environment. Have a look at our gallery just below the fold.

Billy Steele contributed to this report

In this article: auto, automotive, ces2014, hands-on, mercedes, mercedes-benz, qnx
All products recommended by Engadget are selected by our editorial team, independent of our parent company. Some of our stories include affiliate links. If you buy something through one of these links, we may earn an affiliate commission.