The Wirecutter's best deals: a Vizio 4K TV, the UE Roll, and more!

Light-powered armband monitors your vitals without tethering you 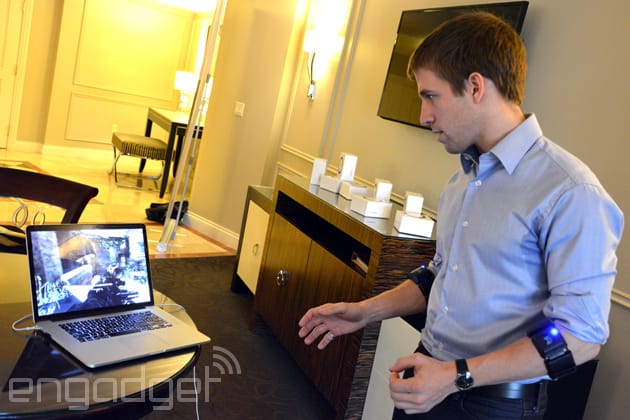 2013 saw the rise of gesture cameras for TVs and various smart devices, but Canadian startup Thalmic Labs thinks its Myo armband is the way forward. During our meeting at CES earlier, co-founder and CEO Stephen Lake explained that his Bluetooth 4.0 device features a new type of biosensor, which can pick up minute electrical impulses in our arm muscles. This allows any wrist movement, finger twitch or fist clenching to be interpreted as a gesture, so long as the inner side of the Myo has skin contact. There's also an accelerometer, a gyroscope and a magnetometer, so arm and body movements are accounted for as well.

The idea of Myo traces back to the co-founders' university days, where they explored various wearable technologies while working on a navigation aid for the blind. Lake said since brain control isn't quite there yet, his team found muscle sensing to be the next best thing. From what we saw and tried today, Thalmic Labs seems to be on the right track: We watched co-founder Aaron Grant play Call Of Duty: Ghosts using just a pair of Myos, and he was able to make his avatar run, crouch, jump, fire weapon and reload. Lake also gave a demo on music playback control and slideshow presentation on an iPad, both of which worked just fine. But it doesn't stop there; the CEO also sees opportunity in industrial robotics, space application and even gesture-based authentication.

The retail version of the Myo will arrive within the first half of 2014, and not only will it be half as thick as the Myo Alphas shown today, but it'll also feature at least two core applications that will make full use of the armband. Lake said he'll be showing the final design in the next couple of months, but if you're game, you can now head over to Thalmic Labs' website to pre-order a black or white one for $149. Need more convincing? Then check out our in-depth demo video after the break.

Update: We also got to see how you can fly a Parrot AR.Drone 2.0 with a Myo! Check it out.

8
Coverage: Thalmic Labs
In this article: armband, ces2014, featured, features, gesture, gesturecontrol, gestureinput, hands-on, myo, thalmic, thalmiclabs, video
All products recommended by Engadget are selected by our editorial team, independent of our parent company. Some of our stories include affiliate links. If you buy something through one of these links, we may earn an affiliate commission.