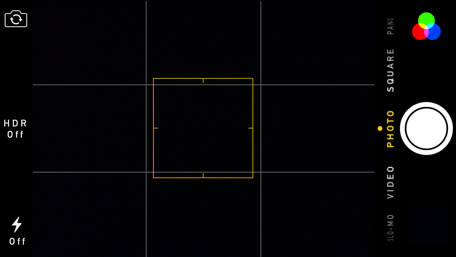 If you are a camera buff who is dabbling with iOS 7 for the first time, you may be spending some time in the Camera app, checking out the features available for your mobile photography needs. One feature that is not readily apparent, but important to photographers, is the grid lines. Earlier versions of the iOS Camera app placed the gridline toggle button in the options, which was accessible from the main screen of the Camera app. This placement changed in iOS 7 and the toggle is a bit harder to find. To turn on the Camera grid lines in iOS 7, you have to open the Settings app and then scroll down to "Photos & Camera." Tap on "Photos & Camera" to access the settings and scroll down until you see "Grid." You can turn the Grid on or off using the toggle. You'll know it's on when the toggle is green.

When the grid is turned on, you'll see the familiar lines in your Camera the next time you open the app. Unfortunately, the placement of the grid option in the settings does not make it easy to toggle the feature on/off. I end up leaving it turned on and learned to ignore the lines when I don't need them. Do you use the grid lines with the Camera app on iOS?

In this article: camera, iOS, iPhone, iphoneography
All products recommended by Engadget are selected by our editorial team, independent of our parent company. Some of our stories include affiliate links. If you buy something through one of these links, we may earn an affiliate commission.