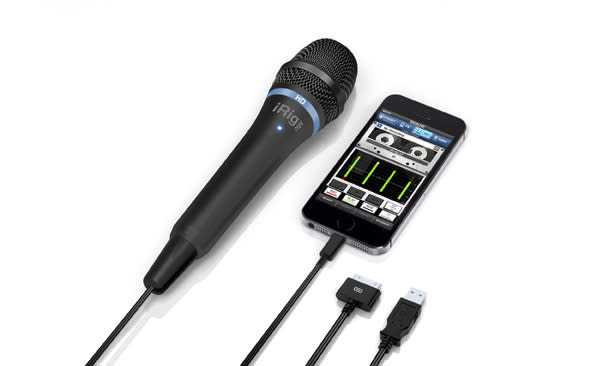 We've seen our fair share of mobile recording gear, and IK Multimedia is certainly no stranger to the fray. For those who prefer a more hand-held approach to tracking with an iOS device, the outfit has outed the iRig Mic HD. The digital condenser microphone is capable of handling your best attempt at Freddie Mercury's vocals, instruments and good, ol' spoken word with a 24-bit digital converter and a shape that will sit cozy in standard mic stands. There's also a built-in preamp and LED status indicator to keep levels in check -- similar to what we've seen on some of the company's previous releases. Of course, the main selling point is the unit's compatibility with the iPhone and iPad via Lightning connector (an improvement over its predecessor), but the device also plays nice with Mac thanks to added USB connectivity. As you might expect, the iRig Mic HD works with IK Multimedia's stable of apps like AmpliTube and iRig Recorder for those mobile captures. If you're still sporting older iOS wares, a 30-pin cable can be purchased separately when the $99.99/€79.99 accessory arrives next quarter.

In this article: IkMultimedia, iOS, irigmichd, mic, microphone, namm2014, peripherals, recording
All products recommended by Engadget are selected by our editorial team, independent of our parent company. Some of our stories include affiliate links. If you buy something through one of these links, we may earn an affiliate commission.