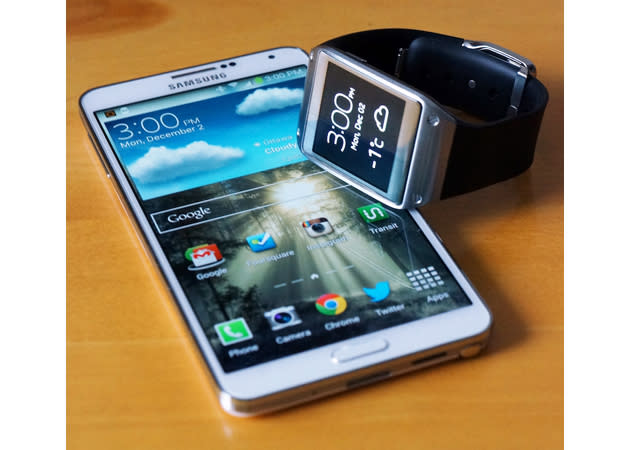 Samsung had a rough day yesterday. Its earnings report indicated the company experienced the first posted drop in profit in two years (a mere $7.8 billion, compared to $8.27 billion in the same quarter last year), thanks to a strong Korean won, a special one-off bonus payment to employees and heavy holiday marketing costs. Given its increased year-over-year profits and sales this may not seem so bad, but there is a growing concern that the company has a difficult year ahead, especially for smartphone sales.

The company expects slowing sales in the first quarter of 2014 for its smartphones and tablets, thanks to "seasonality." This means fewer people are buying mobile devices -- as a new Galaxy flagship approaches, many people put off their phone purchase until it comes out. But the company also indicated that the mobile battlefield is only going to get fiercer over the next year, as developed markets are reaching saturation. Now, the war is shifting to developing markets where more people are becoming smartphone and tablet owners for the first time.

With developed markets becoming saturated and experiencing slow sales, regions like China are ripe for the picking.

In its earnings report, Samsung stated: "In 2014, Samsung will focus on expanding its smartphone portfolio both by region and price range, and actively responding to growing LTE demand in Europe and China. Expect ... intensified price competition, amid developed and emerging markets to continue rapid growth." With developed markets becoming saturated and experiencing slowed sales, regions like China are ripe for the picking.

This isn't to say that Samsung doesn't already have a large presence in areas like China and India -- it's currently the market share champion in both countries -- but its dominance is quickly slipping as it faces intense competition from both local and global companies alike. Local powerhouses Micromax and Karbonn are quickly catching up to Samsung in India, and in China, Apple has experienced exponential growth in recent quarters; reports indicate that the iPhone 5s and 5c helped Apple more than double its market share to take third place. The phones launched on China Mobile (the country's largest carrier with 750 million customers) this month, so we expect Apple's foothold to only get stronger there in the coming months. But that's not the only large company making strides in China: Lenovo, which is in second place, is also growing significantly.

If the rumors about Apple releasing iPhones in larger form factors are true, Samsung will have to directly compete against a major force that didn't exist last year.

Not only is there more competition in these countries in general, there's also a much more pointed focus on specific form factors and price points. As we pointed out in an earlier piece, the under-$100 pricing tier is becoming very aggressive, especially in emerging markets. Additionally, the large-screen smartphone, a form factor once dominated by the Galaxy Note, is now covered by nearly every major company. If the rumors about Apple releasing iPhones in larger form factors are true, Samsung will have to directly compete against a major force that didn't exist last year.

As the battle continues to intensify in countries like China, where demand is growing at a tremendous pace, Samsung's profit margins will get squeezed as phone prices plunge. Thus, we expect to see the company hit tablets and wearables even harder in 2014 -- according to Samsung, the former will experience a 20 percent increase in demand, and it has more of the latter on the way as well. We don't know if it will be enough for the company to enjoy a record year, but Samsung is under more pressure to bedazzle its customers than at any time in recent memory. It's just going to have to be more creative to stay on top.

In this article: developing markets, earnings, editorial, emerging markets, loveisalsoabattlefield, mobilepostcross, samsung, smartphones
All products recommended by Engadget are selected by our editorial team, independent of our parent company. Some of our stories include affiliate links. If you buy something through one of these links, we may earn an affiliate commission.