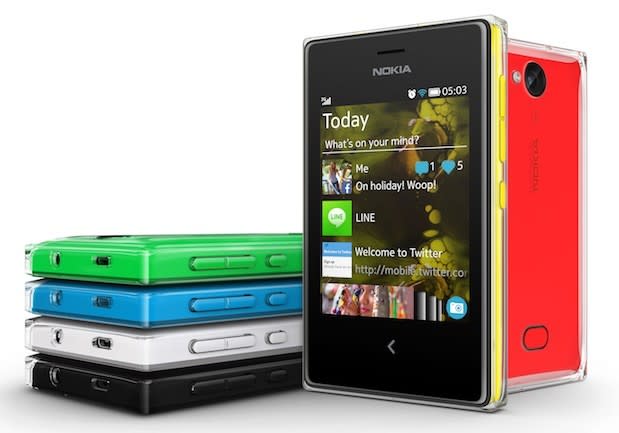 "Year-on-year decline." Those are words that no company looks forward to publishing in its earnings reports, but unfortunately we've seen them printed more often than not on Nokia's quarterly statements. Though there have been a few ups and downs, struggling profits and sales have been a general concern for a long time, and unfortunately this quarter's earnings report did little to soothe our worries; Nokia sold 600,000 fewer Lumias than the previous quarter. Now that Microsoft's acquisition of Nokia's devices and services division is nearly complete, much of our focus has turned to how the merger will affect the Lumia lineup of Windows Phones. An even bigger mystery at the moment, however, is what Microsoft will choose to do with the rest of Nokia's phones -- namely, the Mobile Phone division, which consists of the company's basic featurephones and the Asha lineup of advanced featurephones, none of which run Windows Phone.

Just after Microsoft announced its intent to acquire the phone maker, Nokia insisted that the division wasn't going anywhere; it has "substantial global reach ... and a strong customer base," but in emerging markets like India and China, it faces intense competition from fully functional smartphone platforms for a similar cost. Even worse, as we learned in yesterday's report, sales from this division were flat -- and as the competition gets heavier, it's going to get worse, not better. Is it worth it for Microsoft to try saving a lineup of handsets that don't feature Windows Phone OS? Or does it make more sense to push lower-end Lumia devices to cater to the next billion smartphone users?

We've seen several companies make huge moves to compete in emerging markets, where even a difference of $10 or $20 can have a significant impact.

In yesterday's report, Nokia stated: "Our Mobile Phones net sales were affected by competitive industry dynamics, including intense smartphone competition at increasingly lower price points and intense competition at the low end of our product portfolio." In other words, an influx of cheap Android and Firefox OS devices is making it difficult for Nokia's lower-end devices to remain relevant in fiercely competitive countries like India and China.

The Ashas, which bridge the divide between featurephones and smartphones, range from $70 to $100; however, Android devices like the Galaxy Pocket cost around $85 in the same markets and offer similar specs with a much wider variety of apps. Firefox OS devices like the ZTE Open are now available for around $75. Heck, even the Lumia 520, which uses the Windows Phone platform, costs roughly the same as an Asha.

We've seen several companies make huge moves to compete in emerging markets, where even a difference of $10 or $20 can have a significant impact. Unfortunately, this means it's much more difficult for the Asha lineup to compete today than just a couple years ago when they were first introduced. At the time, the concept was sound -- if you offer a featurephone with smart abilities like a developer platform, messaging/email, social networking and so on, the customers will come. But today, as other platforms like Android and Firefox begin to flourish in emerging markets for the same prices, developers have less incentive to focus on making apps for Asha products, and consumers will become more hesitant to buy into the ecosystem.

There's still a place for the simplest of phones. The $20 Nokia 105, for instance, is a basic candybar phone that offers a few nice extras like FM radio, flashlight and (best of all) month-long battery life. But what about the $85 Nokia 301 (pictured above), which offers a camera, HSPA connectivity and Mail for Exchange? How about the $160, aluminum-clad Nokia 515? We're not so sure there's a place for them in the years to come. It's fantastic to see a lot of variety in the low end, but these handsets won't be able to stay afloat in a sea of similarly priced phones that have more capabilities.

These handsets won't be able to stay afloat in a sea of similarly priced phones that have more capabilities.

Nokia states that featurephones won't be going away under Microsoft's reign, and everything under the Mobile Phone umbrella will continue on. But outside of the Nokia 105, we just don't see how selling a featurephone that costs more than $60 makes sense -- and if Microsoft continues the Asha lineup, it would have to add even more functionality in order to compete with phones that boast full smartphone platforms. This is where a device like the oft-rumored Normandy would play an interesting role, since it's reportedly an Asha-class phone that features a forked version of Android. However, Microsoft may not be so keen on Nokia launching the phone for that very reason.

Regardless of what happens to the Normandy in the end, we doubt it will have much of an effect on Microsoft's end goal -- to help Windows Phone blossom and grow. The best place to do that right now is in emerging markets, where it's finally becoming affordable to get a smartphone. Nokia created a lot of momentum with low-end smartphones like the Lumia 520, which Softpedia claims was the best-selling Windows device in the world in September. Microsoft should take advantage of those successes instead of focusing on products that deter from its objective.

In this article: asha, DumbPhone, emerging markets, lumia, microsoft, mobilepostcross, nokia, smartphone
All products recommended by Engadget are selected by our editorial team, independent of our parent company. Some of our stories include affiliate links. If you buy something through one of these links, we may earn an affiliate commission.