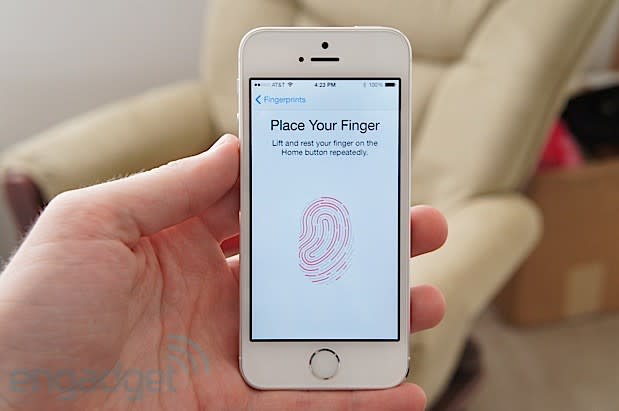 The mobile payments arena may not seem so big right now, but make no mistake: We're just seeing the beginning of a rapidly growing trend. Some estimates we've seen from market research firms put the future mobile payment market in the US alone at around $90 billion spent in 2017. Compared to that, the $12.8 billion spent in 2012 is just pocket change underneath the couch cushions. Apple's very much aware of the revenue potential in this category, and it's taking the possibility seriously.

"Mobile payments in general is one [area] that we've been intrigued with, and that was one of the thoughts behind Touch ID."

On today's quarterly earnings call, Apple CEO Tim Cook stated that people love to buy content using Touch ID, the fingerprint reader featured on the iPhone 5s. "Mobile payments in general is one [area] that we've been intrigued with, and that was one of the thoughts behind Touch ID," Cook said. "We're not limiting ourselves just to that." This is the first direct confirmation that mobile payments were at least on the table in some form when Apple began developing Touch ID. This wasn't a promise from Cook that anything will happen in the near future, but it seems as though Apple would be leaving a lot of money on the table if it sat on the opportunity.

As soon as smartphone makers began adopting Near-Field Communication (NFC), the concept of using the tech to facilitate wireless payments began to bloom. Not coincidentally, Apple found itself receiving criticism for not adding the standard into the iPhone. Because of this, mobile payment tech has become a hot-button issue for critics who argue that Apple isn't keeping up with the rest of the smartphone industry. Three days ago, however, The Wall Street Journal reported that iTunes and App Store chief Eddy Cue personally met with unnamed industry executives to talk about getting involved with handling payments for goods and services. Whether or not this directly involves NFC remains to be seen, but it at least indicates that Apple is working on moving forward with mobile payments in some shape or form. The publication also reported that the company is shifting some of its executives into roles that will help build some sort of payment business; this isn't the first time we've heard whispers that Apple was looking into the industry, and it's much more likely to rapidly expand going forward.

Tie these rumors in with Cook's declaration that mobile payments were a driving force behind Touch ID (Cook didn't specify how much of a force, but the topic was at least a part of the discussion), and then consider Apple's inclusion of services like Passbook and iBeacon location sensors, and everything starts to make sense. The company has been hard at work providing a foundation for a possible mobile payment option, and Touch ID is just another logical part of the framework.

The company has been hard at work providing a foundation for a possible mobile payment option, and Touch ID is just another logical part of the framework.

Combining biometrics with wireless payments seems like a natural match, but security and privacy are still significant hurdles that the company needs to jump over before it can become accepted by the masses. Apple is convinced that Touch ID is more secure than any other method of identity verification. Much of the public, however, was not as easily persuaded when the iPhone 5s was announced. The response from the public was mixed, varying anywhere from praise to skepticism and, in some cases, to anger; Senator Al Franken even got involved in the discussion, sending Cook a letter addressing the potential privacy concerns involved.

Part of the solution is simply waiting for the right time to dive in. As more Touch ID-enabled iPhones are sold, the feature will continue to become more used and accepted, and most concerns will be soothed. More and more people will start using Touch ID to pay for iTunes purchases as they get comfortable with the feature. Given that iTunes made more than $2 billion this past quarter, it's not too hard to visualize the benefits of Touch ID progressing into other moneymaking ventures for Apple.

Even though today's statement by Cook wasn't an official guarantee that his company is diving into mobile payments, it'd be silly to expect Apple to just sit idly by in the coming years. With features like Touch ID, Passbook and iBeacons laying the groundwork for a future service, it's pretty clear that this is an area of intense interest for the company. The next step is to determine when and how to slice up its piece of the pie.

In this article: apple, biometrics, fingerprint reader, iphone, iphone 5s, mobile payments, mobilepostcross, nfc, touch id
All products recommended by Engadget are selected by our editorial team, independent of our parent company. Some of our stories include affiliate links. If you buy something through one of these links, we may earn an affiliate commission.