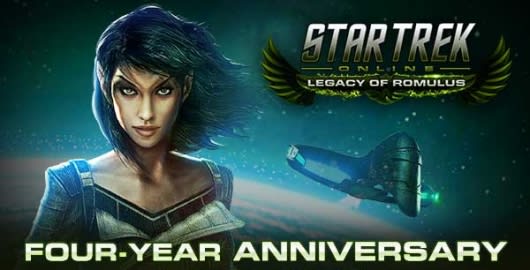 Space -- it's not really much of a frontier any longer. These are the voyages of a large number of different ships in Star Trek Online. Their continuing missions: To complete reputation projects. To seek out new ships and new duty officers. To boldly go where a lot of people have gone over the past four years -- specifically, 3.2 million captains -- but it's still worth exploring just the same!

With the official four-year mark for the game just around the corner, Cryptic Studios has put out a new infographic detailing stuff like exactly how many captains are currently exploring the final not-so-much-a-frontier. It also contains a handy timeline of the game's major content releases over the past four years and all of the former Trek actors now providing voices to iconic characters in the game. If you want a quick look at the game's history for yourself, check out the infographic on the official site.
Source: Source: Anniversary infographic
Coverage: More: Official Site
In this article: anniversaries, anniversary, cryptic, cryptic-studios, culture, f2p, free-to-play, inforgraphic, information, news, news-items, numbers, perfect-world, perfect-world-entertainment, pwe, sci-fi, star-trek, star-trek-mmo, star-trek-online, statistics, stats, sto
All products recommended by Engadget are selected by our editorial team, independent of our parent company. Some of our stories include affiliate links. If you buy something through one of these links, we may earn an affiliate commission.