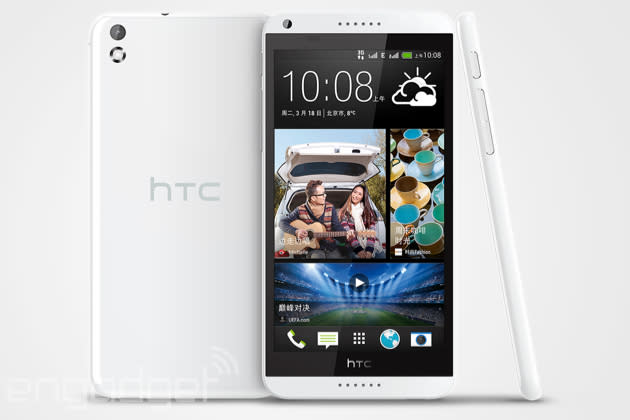 Despite HTC's recent blast of Desire phones, the company admitted that it still needs to push harder in the lower price tiers. Lo and behold, here's a leak of an upcoming "New Desire 8" series mid-range device, courtesy of Chinese site MyDrivers and with confirmation from our own sources. This dual-SIM phone will reportedly pack a 5.5-inch display of unknown resolution, which will make it the largest non-flagship HTC phone since the Desire 700. There will also be a 13-megapixel main camera (not UltraPixel), along with a 5-megapixel front imager with beautification mode. We're assuming that this is a plastic body -- available in white, red, yellow, orange and cyan -- with stereo front-facing speakers, which is now a signature feature on many HTC phones. But where are the Android buttons? Chances are this Desire model is joining the M8 flagship to embrace on-screen keys, despite their absence in this render.

The screenshot mentions "March 18th" plus Beijing, so unless Peter Chou is messing with us here, we'll be making ourselves available that day for the launch event in China. Having said that, we might also get to see it at MWC in two weeks' time, so stay tuned.

Update: A reliable tipster sent in the original image, so we've updated this article with it.

In this article: china, desire, desire8, htc, mobilepostcross, newdesire8
All products recommended by Engadget are selected by our editorial team, independent of our parent company. Some of our stories include affiliate links. If you buy something through one of these links, we may earn an affiliate commission.