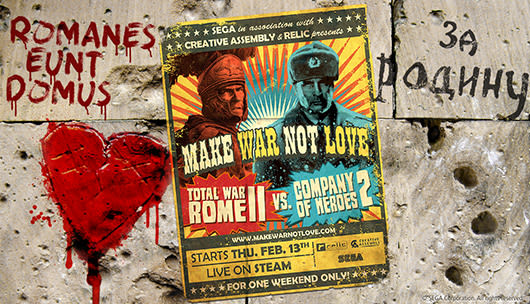 The rules are simple: During the course of the weekend, Sega will tally all victories earned by players in Total War: Rome 2 and Company of Heroes 2. Whichever game has the more active, successful community will receive free downloadable content. In the case of Total War: Rome 2, players will be awarded the Beasts of War add-on, while those playing Company of Heroes 2 will find two new multiplayer Commanders available at no additional charge.

To further sweeten the temptation toward virtual bloodshed, Sega is also discounting both strategy games by 50 percent from now until Monday, February 17 at 10AM PT. Would-be virtual generals can now purchase Total War: Rome 2 for $30 while Company of Heroes 2 can be had for $20.
[Image: Sega]
Show full PR text
MAKE WAR NOT LOVE THIS VALENTINE'S WEEKEND AS TOTAL WAR: ROME II & COMPANY OF HEROES 2 GO HEAD-TO-HEAD

SEGA presents the heavyweight bout they said could never happen, as two giants of the strategy game genre throw it down for a dirty Valentine's weekend battle exclusively on Steam! Relic's Company of Heroes™ 2 and Creative Assembly's Total War™: Rome II players will face off in the 'Make War Not Love' promotion, with the winning community earning their chosen game some brand-new free DLC for five days.

From 10:00 AM PST today battle will commence with each in-game victory earning points that will count towards a total tally. Players of both sides can keep track of who's coming out on top at www.makewarnotlove.com up until the contest reaches its climax on Monday February 17, 2014 at 10:00 AM PST. Be sure to follow both sides on Twitter to get involved in all the pre-match trash talk, it's gonna get messy. @companyheroes and @totalwar.

For added pleasure, each game will be on sale via Steam at 50% off for the duration of the promotion. So slip into something comfortable, flex those fingers and get down to business. Every player's contribution counts.

If the glory of Total War: Rome II prevails, the latest DLC unit pack, Beasts of War, will be made available for fans to pick for free via Steam for five days.

If Company of Heroes 2 lands the knockout blow, two new multiplayer Commanders will be free to download via Steam for five days.

"Company of Heroes? More like Company of ZEROES, am I right?" said Craig Laycock, Community Manager for Total War at a recent weigh-in. "Their dreams will fall apart like a poorly-maintained M4 Sherman, rusting at the seams, and it'll be Total War players that confine them to the scrap heap."

COH2 Community Manager, Jeffery Simpson responded in bullish fashion saying, "The only people dreaming here are the Total Bore team. Even a poorly maintained M4 Sherman would bust through the flimsy armor of a bunch of prissy Roman Legions. Doesn't matter how many swords you bring to this gunfight, you're going down."

For more information regarding the Make War Not Love promotion, including full details on the scoring system and how to get involved, log on to www.makewarnotlove.com.
In this article: company-of-heroes-2, creative-assembly, pc, promotion, relic, rts, sega, steam, strategy, total-war-rome-2
All products recommended by Engadget are selected by our editorial team, independent of our parent company. Some of our stories include affiliate links. If you buy something through one of these links, we may earn an affiliate commission.