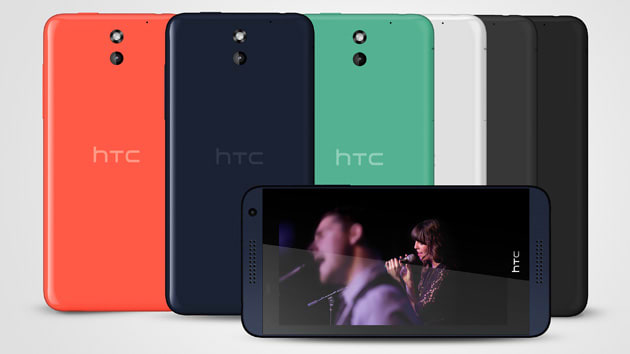 Joining HTC's "flagship mid-range" Desire 816 at MWC is this smaller, but similar-looking Desire 610. As the cheaper model of these two LTE phones, many things have been downsized a little here: There's a 4.7-inch 960 x 540 display, a 1.2GHz quad-core Snapdragon 400 chip, 1GB of RAM and a fixed 2,040mAh battery. The cameras are also more modest, with the main one sporting an 8-megapixel sensor with f/2.4 aperture, and the front imager featuring a 1.3-megapixel sensor. Both can only handle 720p video recording. On the flip side, the Desire 610 has preserved some of the goodies from its bigger sibling: microSD expansion (but up to 64GB instead of up to 128GB) on top of the built-in 8GB of space, BoomSound stereo frontal speakers, nano-SIM support and LTE radio for either EMEA or Asia.

There's no pricing info at the moment, but knowing that the Desire 816 will be priced extremely competitively, here's hoping that the Desire 610 will cost a tad less than Huawei's counterpart, the €249 (about $340) Ascend G6 4G. Expect this device to arrive in Europe sometime in May.

In this article: android, boomsound, desire610, htc, lte, mobilepostcross, mwc, mwc2014, phone, snapdragon400
All products recommended by Engadget are selected by our editorial team, independent of our parent company. Some of our stories include affiliate links. If you buy something through one of these links, we may earn an affiliate commission.