You may be able to make in-flight calls next year, but not on Delta 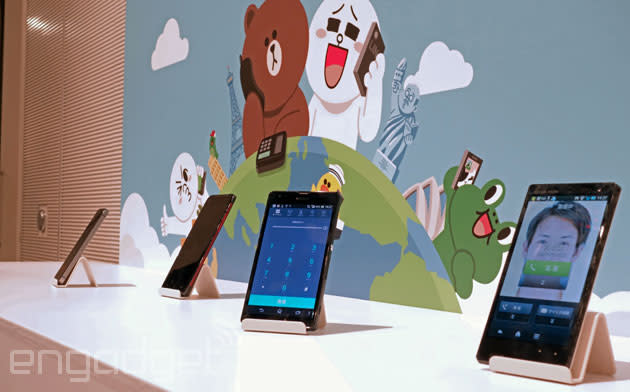 It's all about stickers, really. LINE means stickers, but as the company keeps telling us, its apps do so much more than that -- and even more starting next month. The Japanese messaging service is launching a new data-based call service that attempts to undercut the voice-call pricing on typical land-lines and mobile carriers. With a pay-as-you-go and 30-day plan both outlined at the company's showcase event, it's scheduled to launch this March in Japan, US, Mexico, Spain, Thailand and the Philippines. For its native country, the 30-day plan (priced at one minute for 6.5 yen, roughly 6.4 cents), will offer up to a maximum of 60 minutes maximum, encompassing both mobile and landline calls. A separate call credit plan will cost 14 yen per minute to mobile phones (including overseas) and three yen to landlines.

The company is aiming to expand who LINE users can contact within its app service. An interesting feature is that on smartphones, it will appear as if it's simply a normal phone call -- we saw a demonstration of how incoming calls would appear on an iPhone and (as you'll see after the break), it looks identical. To drum up support, Naver plans to offer the service to 1,300,000 businesses and stores across Japan, as well as 100,000 free 100-yen LINE Call samples to existing users too. In this article: call, hangouts, line, linecall, linemessenger, mobilepostcross, naver, skype
All products recommended by Engadget are selected by our editorial team, independent of our parent company. Some of our stories include affiliate links. If you buy something through one of these links, we may earn an affiliate commission.