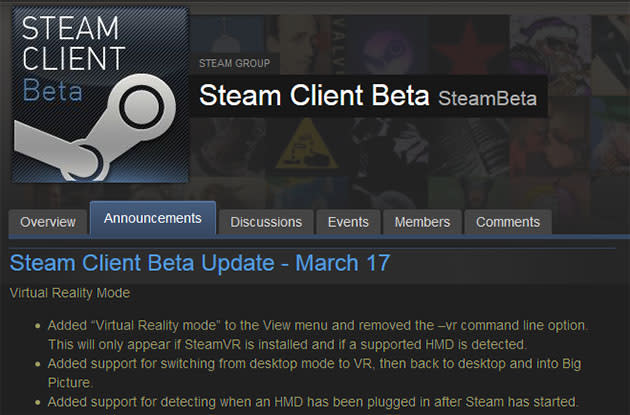 Despite the fact that most of us still don't have an HMD (head-mounted display) like the Oculus Rift, Valve is embracing VR gaming wholeheartedly. Its latest SteamBeta now has a "virtual reality mode" right in the view menu, negating any of the last version's command line futzing. Assuming you have the SteamVR beta installed and an HMD plugged in, you can now switch quickly between the desktop and VR or Big Picture modes. Your HMD can be hot-plugged while Steam is running too, unlike before. With those tweaks, Valve seems well prepared in case a highly-anticipated VR headset shows up at GDC 2014 this week, or something. Right Sony?

In this article: beta, client, OculusRift, steam, VirtualReality, VR
All products recommended by Engadget are selected by our editorial team, independent of our parent company. Some of our stories include affiliate links. If you buy something through one of these links, we may earn an affiliate commission.