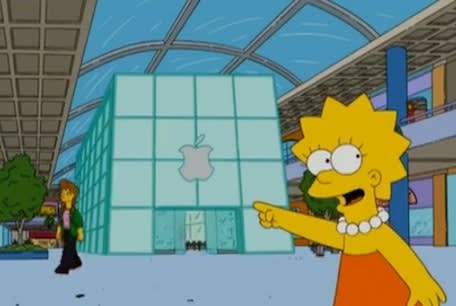 When putting together a comprehensive list detailing every Apple reference ever made on The Simpsons and Futurama, I was lucky enough to chat with a few seasoned Simpsons insiders who gave me so much juicy information that I just couldn't squeeze it all into one post.

Arguably, the most well-known Apple references on The Simpsons come from the 2008 episode titled "Mypods and Boomsticks." Written by Marc Wilmore, the entire first act of the episode spoofs all things Apple, from iPods and the G4 Cube to Apple retail stores and Apple's famed "1984" commercial. The episode is most notable for introducing us to "Mapple", The Simpsons' not-so-veiled homage to Apple. Since "Mypods and Boomsticks" first aired over five years ago, there have been no shortage of Mapple references sprinkled throughout the show.

But just how did the impetus to spoof Apple come about? How did The Simpsons writers come up with the Mapple name?

To that end, episode writer Marc Wilmore was kind enough to answer a few questions and shed some light on all things Mapple. Here's the inside scoop.

According to Wilmore, the idea to spoof Apple had been brewing amongst certain folks on the writing staff for some time. By 2008, Wilmore said that the feeling in the writers room was that Apple at had already reached a level of popularity where they deserved "to be taken down a notch or two."

Most of the writers were kind of tired of the pretentious Apple onstage presentations and were eager to take their shots. And of course, the Steve Jobs signature black turtleneck.

As to how the Mapple subplot began, Wilmore explains that it began out of necessity.

After I wrote the first draft it was pretty clear we needed a "b" story to fill out the script. So, when the family went to the mall for Bart to get lost at, we went to the Mapple store for the start of the Lisa story.

With respect to the "Mapple" moniker, Wilmore relays that it was initially suggested as a bad pun and just happened to stick. From there, the "Steve Mobs" character, which itself employs an 'M' prefix, followed immediately.

Particularly interesting is that the "Mapple" universe wasn't initially intended to extend beyond the episode it debuted in. But as the seasons went on, the Mapple logo would soon begin to appear more frequently on laptops, tablets, and smartphones.

That notwithstanding, longtime Simpsons animator David Silverman told me that the show is very conscious about not overdoing the "Mapple" parody lest folks start thinking the show is engaging in some good ole' fashioned product placement.

Delving a bit deeper on this topic, my original Simpsons/Futurama post reads:

So while the show does have a number of permanent references to real world products (Kwik-E Mart and 7-11, Squishee and Slurpee, Laramie cigarettes and Marlboro, Buzz Cola and Coke), Silverman said that those references are far enough removed from the real thing as to avoid suspicions of product placement. The "Mapple" parody, however, is rather close in name and design to actual Apple products so the issue a bit trickier there. "Even if it's in the Simpsons universe and we created it," Silverman explained, "we don't want to put it in every show because it looks like we're promoting it, and that's not our point. Mapple is too close to the real thing."

What's more, Silverman told me that Simpsons creator Matt Groening has at times even put the kibosh on the use of the Mapple logo when it serves no broader comedic purpose.

As a final point, and returning to my interview with Wilmore, I concluded by asking him if the writers room at The Simpsons is a Mac-only enterprise.

Out of the sixteen or so regulars, I would say with the exception of possibly two, all of the writers are Mac.

In this article: television, The Simpsons
All products recommended by Engadget are selected by our editorial team, independent of our parent company. Some of our stories include affiliate links. If you buy something through one of these links, we may earn an affiliate commission.