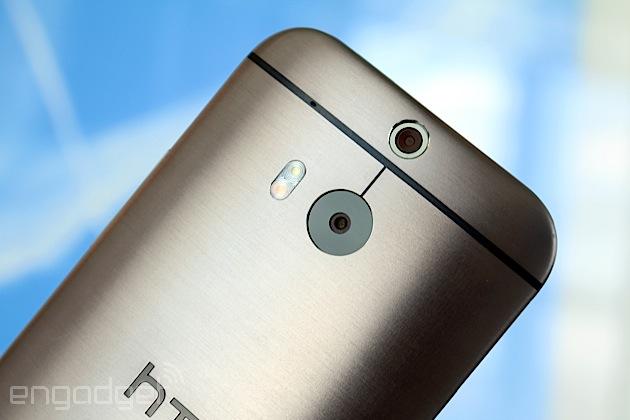 Finally, we have an official explanation for the two round holes in the back of the new HTC One. The main camera, which sits in the regular spot, houses a 4MP "UltraPixel" camera much like on last year's handset. The smaller lens, which is positioned directly above -- or to the side when you hold the phone in landscape mode to grab a shot -- contains half the resolution (i.e., 2MP), but it doesn't actually capture images. It merely offers a level of depth perception, allowing the camera to "understand objects in physical space." A key benefit of this, according to HTC, is a quicker autofocus time of around 300ms, because the camera can use actual depth measurements to focus on objects. Other benefits come when you edit a photo, thanks to a range of effects (such as blurring) that can be selectively applied to foreground or backgrounds subjects. HTC has also just announced an SDK that will allow third-party app makers to make use of the Duo Camera's depth map, which is stored as metadata within JPEG files. For more, including sample images, check out our full review of the HTC One.

In this article: camera, duocamera, htcone, m8, mobilepostcross
All products recommended by Engadget are selected by our editorial team, independent of our parent company. Some of our stories include affiliate links. If you buy something through one of these links, we may earn an affiliate commission.