Before you send in your angry emails, comments and tweets that decry me as a hatchet-wielding antichrist, let's begin by saying that I'm not a gamer. I do play games, but I have no specific allegiance to a console or manufacturer -- I simply go where the fun is. My console history, for editorial balance, includes the VIC 20, Commodore 64, NES, Mega Drive (Genesis), PlayStation, PlayStation 2, Xbox 360 and the Wii. That means that I'm about as much of a dilettante as you can be, and there's no bias or malice in the following. Just disappointment. 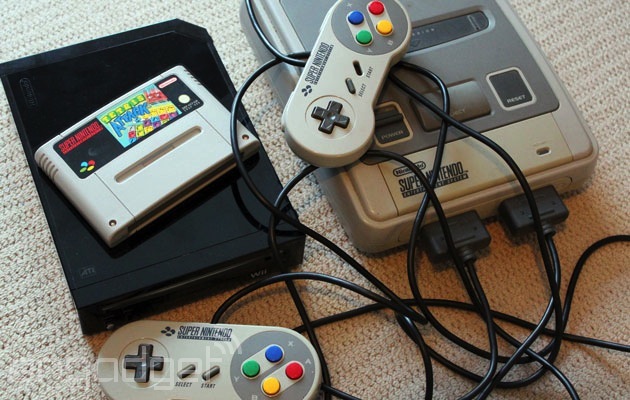 My wife, you see, isn't a fan of technology. And yet, despite never joining in games, she holds a soft spot for the Super NES. She takes on (and beats) all-comers on Super Mario Kart, but her favorite game, and the one that she's probably devoted the most time to, is Tetris Attack. For those not in the know, it's a reskinned version of the Japanese puzzle game Panel De Pon, which was later reskinned as Pokémon Puzzle League and, later, Puzzle League for the DS. Anyway, my wife's friend recently came over, and we dug out the SNES so the two of them could while away the time. Unfortunately, the console is now 22 years old, and both controllers are now nearly unusable. "Never mind," said I, dusting off our unused Wii. After all, I'd heard plenty about the Virtual Console service that promised nearly every SNES game had been added to the digital store, and it wouldn't take long before they could play the game with the Wiimotes doubling as controllers.

This is where things start to fall apart. Nintendo, for some capricious reason, has declined to release Tetris Attack for the Virtual Console. I say for some "capricious reason," but it's because Henk Rogers, CEO of the Tetris Company, is annoyed that the game carries his beloved branding. Heartbroken, we decided that as a sop (and to get the evening's frivolities going), we'd buy Pokémon Puzzle League, despite how annoying Pokémon is for anyone who isn't a Pokémon fan.

Before you can buy the game (or click on the entry in the store), the console requests you buy Nintendo Store credits. So, after another five minutes of trying to put credit card information onto the system (which isn't the easiest in the world, I assure you), we're finally in a position to purchase the game. Except it's at this point, when you click through, that Nintendo decides to tell you that you can't use this game without purchasing the Nintendo Classic controller. Which wasn't going to be possible at 8 p.m. on a Saturday.

What's the moral of the story? There are two, I guess. Firstly, don't be the sort of self-absorbed ass who just presumes a company would make logical decisions instead of doing the research. That level of self-absorption could also manifest itself in the decision to write 700 words on the subject and attempt to pretend this isn't merely the most first-world of first-world problems. I'm happy to accept the charge, and my hubris will linger forever in the £7 that sit on my Wii, unused for time immemorial.

The second, of course, is that for the sort of novice consumer looking to buy a product from Nintendo, the company doesn't make things easy. After all, it could have shown me before I added my cash that I didn't have the necessary accessory. It could have also simply rebranded the title as Yoshi's Puzzle League, since a short trawl of the internet shows there's more than one aggrieved, self-absorbed Brit wanting to see this game on the Virtual Console. I don't expect a company to bend over backward to cater to my every need, but I do wonder why Nintendo couldn't have made this process easier.

In this article: engadgetirl, irl, nintendo, VirtualConsole
All products recommended by Engadget are selected by our editorial team, independent of our parent company. Some of our stories include affiliate links. If you buy something through one of these links, we may earn an affiliate commission.