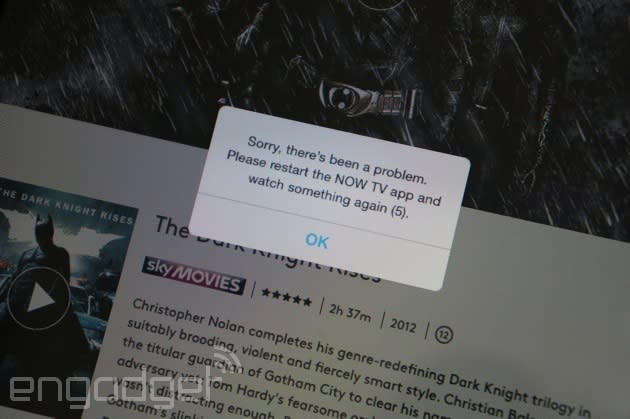 If you've experienced problems trying to access BBC iPlayer or Sky's streaming apps on your iPhone or iPad today, you're not alone. In what appears to be a connected issue, both companies have confirmed that users are currently unable to access their streaming services on an Apple device. Right now, Android phones and tablets remain unaffected, while Netflix continues to enjoy trouble-free playback. The BBC reports that some users have been able to circumvent Now TV errors by setting their iOS clock back by 24 hours, suggesting that the issues are date related. However, the workaround may stop other apps from operating normally. Both the BBC and Sky say they're working hard to restore access to their services, but are unable to say exactly when they expect to be able to do so.

Update: The BBC says things are back up and running for iPlayer on iOS, however we haven't received an update from Sky yet.

Update deux: Not that Sky's support page is any help right now, but at least it's providing timestamped updates as to the state of its services on iThings. They're still down, if you hadn't guessed.

Update 4/18: Sky Go is finally back up and running as well, although iOS users will need an app update (download here) to get things going again.

We are pleased to let you know that Sky Go is working again on most iOS devices. App update required. Details here:http://t.co/IvP2LYPPUg

In this article: bbc, down, iplayer, now tv, sky, sky go, streaming
All products recommended by Engadget are selected by our editorial team, independent of our parent company. Some of our stories include affiliate links. If you buy something through one of these links, we may earn an affiliate commission.