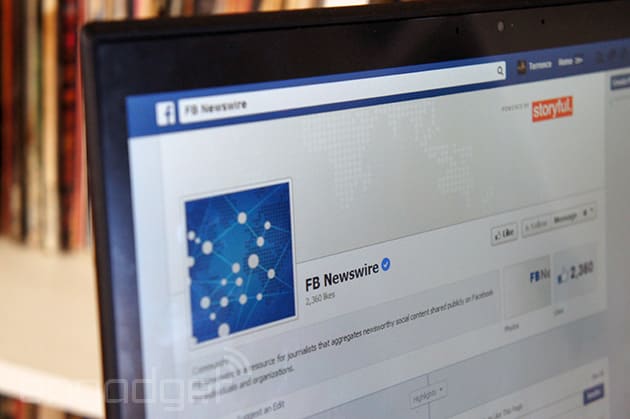 Twitter's made serious efforts to turn itself into more than just a social network: it wants to be the go-to tool for journalists searching for breaking news. Naturally, it makes sense for Facebook to follow suit as the two continue to play feature tag. Newswire is Zuckerberg & co.'s answer to Dataminr for News. It aggregates shared stories, photos and status updates that might be of interest to journalists and news organizations.

This isn't just some haphazard collection of BuzzFeed lists and conspiracy blogs, though. The service is powered by Storyful, a company that specializes in filtering out the noise and delivering "valuable content" through a social newswire service.

Even though it's being pitched at those in the news industry, the page seems like it would be of more interest to the casual news reader. It's not about getting stories to reporters before they become viral sensations, it's about highlighting the best stories out there -- whether they come from a news organization, a personality (such as the president) or a person who just happened to be at the right place at the right time (or the wrong place at the wrong time). News simply isn't as new by the time it reaches that scale.

This isn't just some half-assed, reactionary response to Twitter's own tool. Facebook has been making efforts to improve its news delivery and offer services to journalists for some time. It's been fine honing its Newsfeed for the last couple of years in an effort to surface better content that's relevant to its users. The company's also offered news organizations ways to tap into public conversations taking place on the social network to bring context to their reporting.

It's not hard to imagine that all these efforts will eventually become unified under a single umbrella. Obviously Facebook isn't saying anything right now, but imagine a day where a customized Newsfeed is delivered to you through a mix of machine learning and hands-on editorial guidance from a human being. It would bring news not just to the casual visitor, but to journalists too who would be able to quickly hop into public discussions to pull quotes for their own articles. Of course, we want to keep our jobs, so let's hope the future doesn't come too soon.

In this article: facebook, facebook newswire, journalism, newswire
All products recommended by Engadget are selected by our editorial team, independent of our parent company. Some of our stories include affiliate links. If you buy something through one of these links, we may earn an affiliate commission.