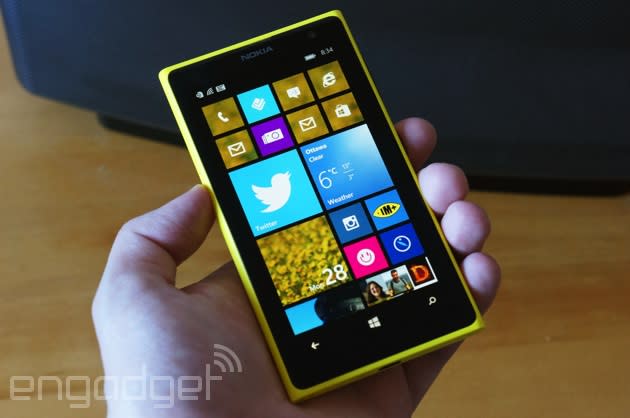 Microsoft's quest for smartphone market share is hitting a few roadblocks, it seems. Kantar estimates that Windows Phone is still gaining ground in Europe, where it's up year-over-year to 8.1 percent of sales in the first quarter of 2014. However, it's taking a bruising in other areas. In the US, Windows swung from increases this fall to a slight dip in the winter; while it's still doing relatively well at 5.3 percent of US share, it's not posing much of a threat to Android or iOS right now. The platform also took a drubbing in China, where its share was nearly cut in half to exactly one percent thanks to the rise of budget Android handsets.

Not that it was all sunshine and roses for the industry heavyweights. Android made strides in China, the US and parts of Europe, but it sank in Australia, Europe and Japan. Some of these losses were due to a recovery from Apple, according to Kantar. The iPhone is still having trouble in China and the US, but it clawed back share in Australia and Europe. It's also dominant in Japan; 57.6 percent of local smartphone buyers chose iOS hardware this quarter.

Whether or not these trends continue through the spring isn't certain. Windows Phone may get a helpful boost from the launches of the Lumia 630 and 930, while Android may get a lift from Samsung's Galaxy S5 flagship. There's also the wildcard of the 8GB iPhone 5c. Although it's not dramatically cheaper than its 16GB counterpart, it could draw a few mid-range buyers to Apple. It's safe to say that Microsoft will be watching very closely -- now that it owns Nokia's device business, it has even more incentives to see Windows Phone succeed.

In this article: android, apple, gear, google, ios, iphone, kantar, kantarworldpanel, marketshare, microsoft, mobile, mobilepostcross, nokia, q12014, smartphone, TL16winfon, windowsphone
All products recommended by Engadget are selected by our editorial team, independent of our parent company. Some of our stories include affiliate links. If you buy something through one of these links, we may earn an affiliate commission.