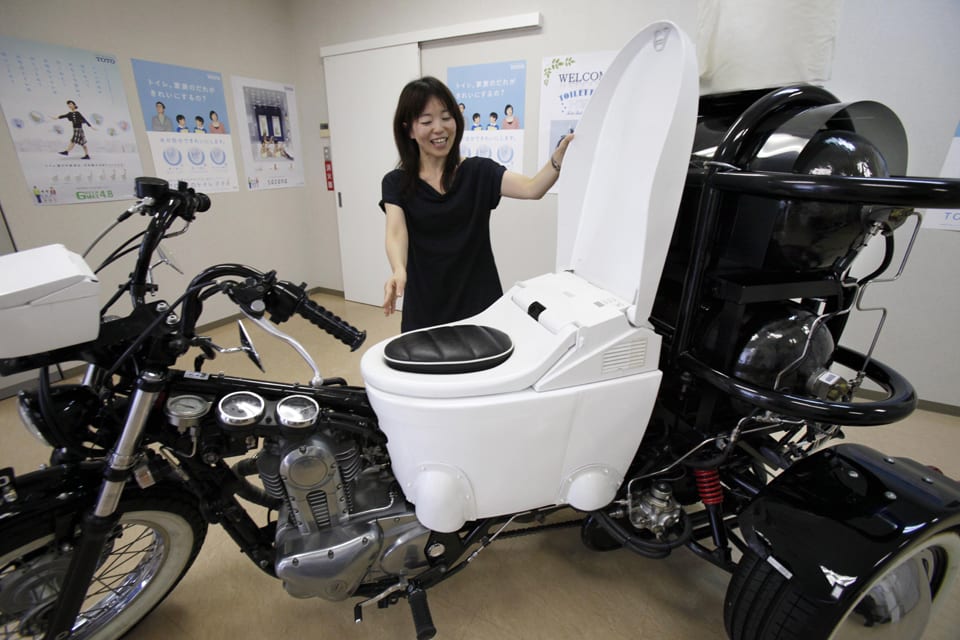 Dirt, stains, effluent, material, the load, waste, matter. These are the words my tour guides at Toto's toilet factory and research center in Kyushu used to verbally pirouette around what exactly its porcelain thrones deal with: shit. Japanese toilets are probably the best in the business at getting rid of your business, but for many Westerners, that first moment of contact can be terrifying. There are so many buttons, so many unknown symbols and open-to-interpretation stickmen figures; not to mention the (unfounded) fear that you could be sprayed with toilet water by merely approaching one. The Washlet, as Toto's combination bidet/toilet is called, doesn't come cheap. And yet, in Japan, they are everywhere. In fact, compared to plain, old, featureless toilets, washlets occupy the majority of restrooms.

Gallery: Toto's Museum: The history of the toilet | 13 Photos Japan's biggest toilet maker isn't based in Tokyo. Toto's headquarters are actually hundreds of miles away from the capital, on the island of Kyushu in the southwest tail of Japan, an area better known for its addictive tonkotsu pork ramen. Toto's been here for just shy of 100 years; early, illustrious years that included making Japan's first seated flush toilet. This is the same company that refers to itself as the "Apple of toilet tech." But for all its technical accomplishments, Toto believes its toilets are the best simply due to its heritage in this area of bathroom fixtures, and not the Star Trek-esque control board attached to the bowl's side.

The washlet's plethora of user settings focuses more on physics and chemistry than electronics. Toto's modern toilet bowls have a nanotech coating on the interior to defend against incidental stains and prevent waste from sticking to it long after you've flushed. The very latest models even partially electrolyze the flush water, which not only adds an antibacterial bonus to every flush, but also has a bleaching effect on urine stains. And some higher-end washlets pack proximity sensors that cause the seat to raise and lower on your approach and dismount. 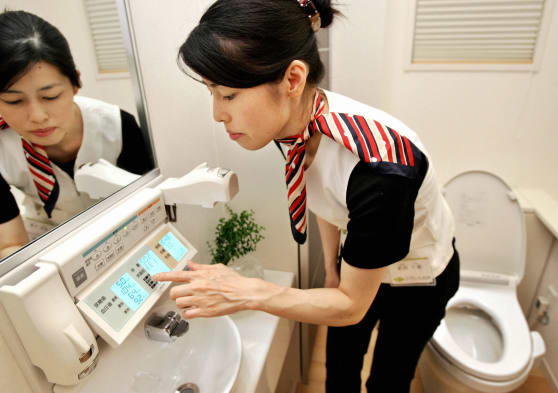 Toto's high-tech integration reached a peak with its nearly 10-year-old, health-centered "Intelligence Toilet." A collaboration with construction giant, Daiwa House, the entire system included scales built into the bathroom floor, blood sugar and blood pressure monitoring, access to the internet (and your physician) and the ability to conduct "urine analysis." It also came with a hefty $6,100 price tag.

A graphical representation of the Tornado Flush.

Then there's the Tornado flush -- think of it as the toilet version of Dyson's "cyclone technology." Toto's team made it a point to drill this specific feature into my head. This particular flushing process uses less water, and as demonstrated by the company's own graphic visualization, is a more efficient way of getting rid of everything. And it's constantly evolving, too. Toto teams up with universities, using supercomputers to model water physics, test flushing processes with particle waste and tweak the shape of its future toilets.

The 'sound princess' and the pee

For decades, modest Japanese would apparently repeatedly flush the toilet in public stalls to mask any trumpeting. The net effect of which was wasted water. To remedy that, Toto invented the Otohime (translation: sound princess) -- a simple noise generator that's often attached to the company's public or business-based toilets. Waving your hand over Otohime's sensor makes a comforting, camouflaging noise play (a delicate melody, or perhaps something representing a tranquil forest) without an actual water flush, so you can sit in peace.

The positives of embedding a bidet function within your toilet, aside from a cleaner oshiri (or "arse" in Japanese), are twofold: It's more economical and, apparently, there's a therapeutic benefit to washing your butt with water. If you're looking for said therapeutic relief, Toto's washlets offer plenty of cleaning options to try out. The typical washlet includes controls for water temperature and pressure, but it can also be further adjusted for both oscillating and pulsing water streams.

With the aid of a strobe light, the Toto team was able to show me how the washlet's pulsing stream behaves; it's apparently set to burst at roughly seven centimeters from the spout, about the location of our collective arses' epicenters. The stream, a mixture of air and water, is also oddly hypnotic, as you'll see below.

The business of the BM

Despite the myriad benefits of a coddled washlet experience, Westerners are still not entirely sold on the toilet upgrade, and not just because of the associated high price. Sure, button panic and the fear of a rogue water stream factor into that hesitation, but there's also the cultural discomfort to consider: Everybody poops, but no one wants to talk about it.

"It can be difficult to engage with consumers; to have a meaningful discussion about features and benefits beyond the design and basic function of a toilet," said Brian Hedlund, marketing manager for US-based Kohler.

Everybody poops, but no one wants to talk about it.

Another US company, Brondell, sells bidet seats to augment existing toilets. As company head Steve Scheer told me, for many consumers, the key to understanding and buying into the luxe toilet experience is to test it out. "Trying to convince someone to change their [toilet paper] habits that have been ingrained in them since childhood were difficult at best. Bidet seats are a very personal and experiential thing in that you must experience it firsthand. You need a trusted source to convince you to try."

Toto's aware these cultural traditions and taboos hamper its reach in outside markets, especially in the US. To counter that, the company runs a Try a Washlet scheme in several bars and restaurants around the US to educate potential clients. Toto's overall aim, however, is not the service industry, but upmarket homes. It's the opposite tact from the bottom-up approach Toto used to build its business in Japan; a washlet for the everyman. In the US and other overseas markets, Toto's marketing the washlet as aspirational; because most of us want what we can't have, even if we're not comfortable talking about it.

The many washlets on display at Toto's showroom. 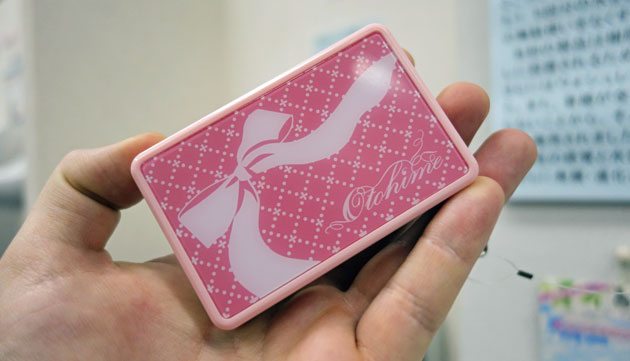 The portable Otohime is a convenient audio disguise for toilets that don't have audio bells and whistles. 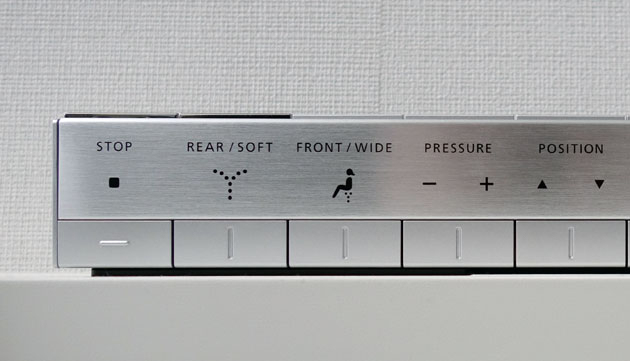 A washlet control panel customized for the US market. That "front" setting is meant for women, but don't let that stop you from trying it.

Relax. The washlet's self-cleaning bidet isn't suddenly going to spray if you press a button -- it's connected to a pressure sensor on the seat. 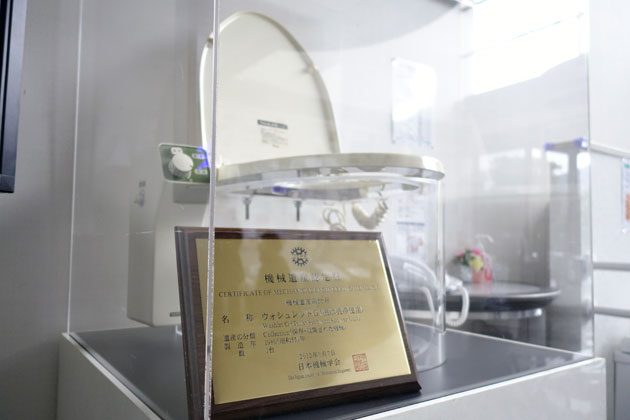 The Washlet G: a toilet so famous it's part of Japan's Mechanical Engineering Heritage, like the bullet train. It was that important. 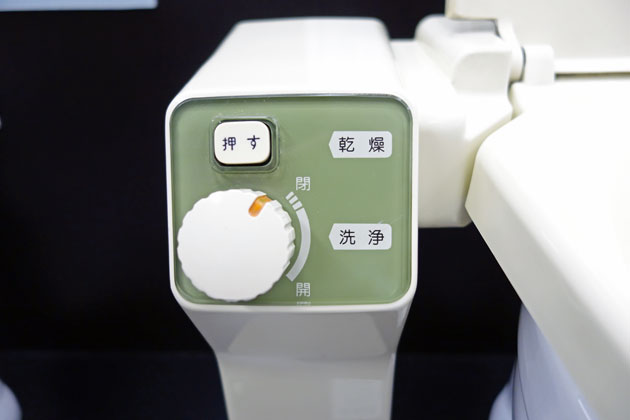 When the Washlet was first conceived, Toto experimented with varying water pressures and temperatures... on its staff. 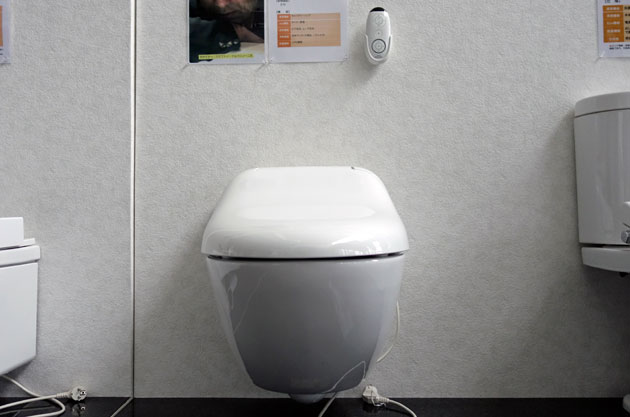 Designer washlets, like this floating model, can cost around $6,000. 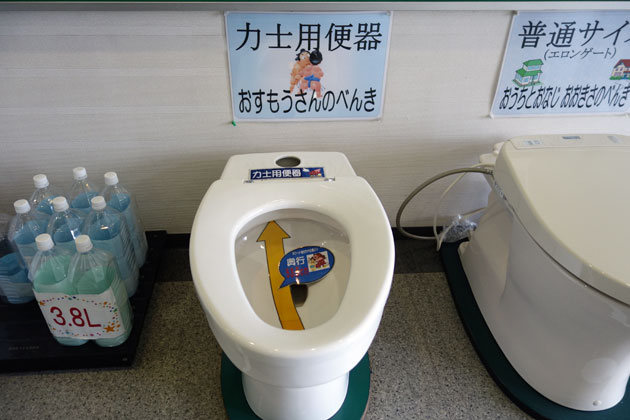 This one's a toilet made for Sumo wrestlers. It's specially strengthened to bear their extra weight.

In this article: culture, gear, japan, japanesetoilets, smarttoilets, toilets, toto, transportation
All products recommended by Engadget are selected by our editorial team, independent of our parent company. Some of our stories include affiliate links. If you buy something through one of these links, we may earn an affiliate commission.