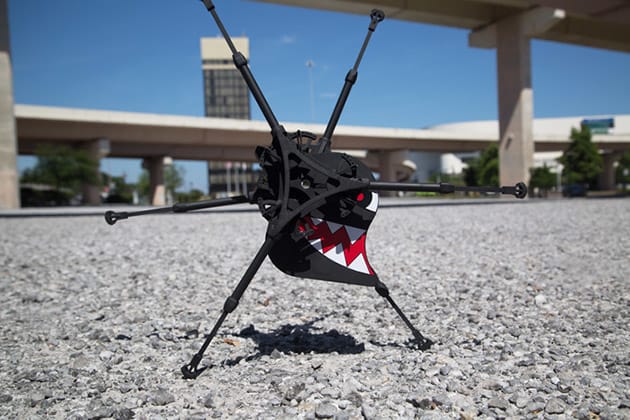 RC cars and helicopters are cool and all, but if you want a combo breaker in your collection, here's something different: a multi-legged robot that runs. At the moment, you can only get this remote-controlled sprinter called the OutRunner through Kickstarter, where its creators are trying to raise $150,000 to fund its production. It's available in two different versions that can run on various terrains, including grass, asphalt and dirt. The basic model called the OutRunner Core is a 1.5-foot tall, 3-pound machine that ships with six legs and can move up to 10mph with a battery that lasts up to an hour. Too slow? Well, there's also the OutRunner Performance, a slightly larger version (2-feet tall and 5 pounds) that ships with 12 legs, an HD camera, and can run up to 20mph for up to two hours. Also, the OutRunner Performance can be controlled with an app as well as with its remote control, and can live stream video and sensor data to a smartphone. Unfortunately for those whose expensive toy funds have run dry, neither of these come cheap -- you'd have to pledge at least $249 to get a DIY kit of the basic model.

Via: Gizmag
Source: Kickstarter
In this article: kickstarter, outrunner, RC
All products recommended by Engadget are selected by our editorial team, independent of our parent company. Some of our stories include affiliate links. If you buy something through one of these links, we may earn an affiliate commission.