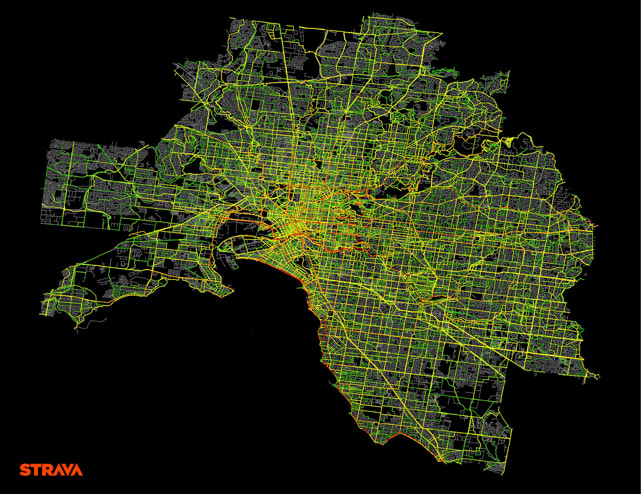 Strava (free) is an extremely popular running and biking app on iPhone, and has long been at or near the top of the fitness app charts. Along with its apps on other platforms including Android and even personal GPS devices, the company has pooled a whole lot of data about your running and cycling habits, which it recently used to create a stunning map of exercise routes around the world. Now the company is using that data as a product of its own, called Strava Metro.

Strava calls Strava Metro a "data service," and it's pitching its massive wealth of user patterns to transportation agencies, city governments, and corporations in a subscription-based format. The data itself, Strava notes, is scrubbed of all identifiable user information, meaning that a company or government entity wouldn't be able to tell exactly where you have been going, just the trends that you and millions of other Strava users produce.

The data is being sold in a rather unique way, right down to each individual Strava member. According to the official Metro FAQ, the fees are based on how many Strava users are present within the geographical area in question. The data on each individual Strava member in an area runs a rate of US$0.80 for a twelve-month time span. Multiply that by thousands of users in an area and you come out to the total cost.

The company's privacy policy is very clear about how it treats your personal information, and the company only uses what you explicitly allow them to. When it comes to your data points, it's unclear whether that is considered to be "personal information." The policy mentions your ability to share specific routes with Strava, but doesn't state whether a data service like Metro -- which deals with anonymized information -- is something that can be specifically opted-out from. We've contacted Strava for clarification and will update as soon as we hear back on this.

Update: Strava replied to my request and noted that there's no way to opt out of having your data included in Metro. So whether you like it or not, you're worth about $0.80 per year.

Update 2 [5/28/14]: Several days after this article was originally published I was contacted by a member of the Strava PR team to clarify that you can indeed keep your data from showing up in metro. He explains:

In this article: data, privacy, security, strava, strava metro
All products recommended by Engadget are selected by our editorial team, independent of our parent company. Some of our stories include affiliate links. If you buy something through one of these links, we may earn an affiliate commission.