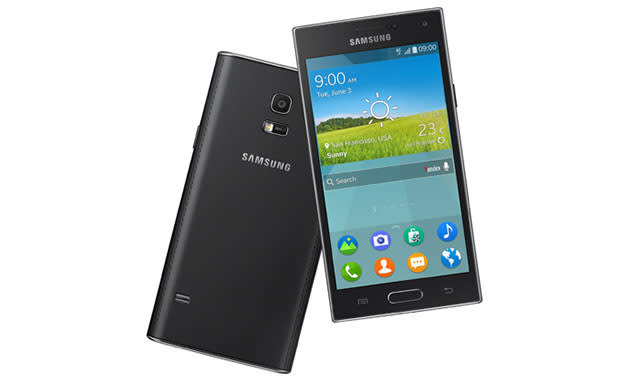 Samsung has been teasing a Tizen-based prototype phones for quite awhile now, but it has finally launched an honest-to-God retail device: the Samsung Z. It's Samsung's attempt at a homegrown non-Android OS (first featured on its Galaxy Gear smartwatch), though it developed Tizen jointly with Intel. The Samsung Z will feature a 720p HD, AMOLED display with a quad-core, 2.3GHz CPU (from Intel we presume, and possibly based on the new "Moorefield" architecture) with 2GB RAM, 16GB memory, LTE, an 8-megapixel camera, a heartrate sensor and fingerprint scanner. Expect to see the same design language featured in its Android-based Galaxy S devices, especially in the app drawer, notification tray and homescreen widgets. Samsung has also promised a "slim, angular design," and will launch it in black and gold on June 3rd at its Tizen developer conference in San Francisco. It'll be available in Russia and other markets shortly thereafter -- expect more details (like the price) soon. 5
Source: Samsung
In this article: mobilepostcross, samsung, SamsungZ, Smartphone, Tizen, Z
All products recommended by Engadget are selected by our editorial team, independent of our parent company. Some of our stories include affiliate links. If you buy something through one of these links, we may earn an affiliate commission.