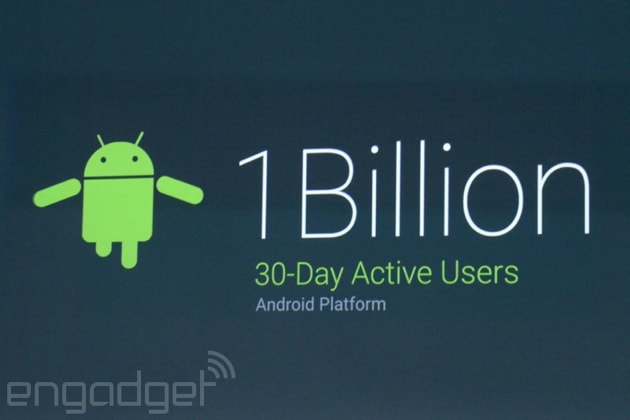 Free-falling product demos and Rube Goldberg multimedia installations aside, there's always a level of predictability to an opening day keynote. And Google I/O 2014 is no exception. Like clockwork, SVP Sundar Pichai took to the stage in San Francisco this morning to tick off the company's latest accomplishments. He started off by touting one of the company's biggest strengths: Android. According to Pichai, Google now has over 1 billion active users (that's as of the last 30 days) on the OS.

Google's apparently opted to track 30-day usage as opposed to year-over-year numbers as in the past. That said, last year, the company boasted 900 million Android activations, up from 400 million the year before. We likely won't get a direct comparison due to the change in tracking, but even with the numbers we have, it's clear Android is still the dominant mobile platform. During its WWDC 2014 keynote earlier this month, Apple's Tim Cook announced the company had reached 800 million iOS devices to date, fewer than Google's Android activation numbers from the year prior.

It's no secret that Google's OS is far and away the biggest stake holder in the smartphone game -- according to Strategy Analytics, it owned 78.9 percent of the market compared to Apple's 15.5 in 2013. As Pichai points out, Android is still at the top of the tablet heap with 62 percent of the market, up from 46 percent in 2013 and 39 percent in 2012. According to Gartner, Android came out ahead of iOS in 2013 for the first time with 62 percent of the tablet market, compared to Apple's 36 percent. Pichai didn't reveal any new app-download numbers, but pointed to a 236 percent increase in tablet app downloads. As of May 15th of last year, Android had reached 48 billion app downloads. That same day, Apple boasted its 50 billionth.

In this article: android, apps, by the numbers, google, googleio, GoogleIO2014, mobilepostcross, numbers, stats
All products recommended by Engadget are selected by our editorial team, independent of our parent company. Some of our stories include affiliate links. If you buy something through one of these links, we may earn an affiliate commission.