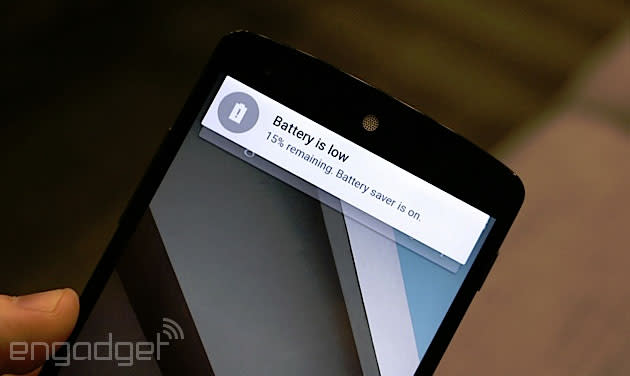 One of the big reveals for Android 4.4 KitKat's successor, Android L, was Project Volta -- new tweaks to improve battery life. Those include a new API that schedules minor tasks better, a "battery historian" to track battery-sapping activities and ART, a more efficient runtime. There's also a "battery saver" mode that kicks in aggressively when only 15 percent of the battery remains. Now that the developer preview has been in the wild, Ars Technica has put it through its paces, along with a number of users on the XDA developer forums. The results? So far so good, with some caveats. Under tightly controlled conditions, Ars Technica managed a whopping 36 percent better battery than KitKat, without even using the battery saver mode. Many XDA users saw comparable results, though battery life was actually worse than on Android 4.4 for some. However, that was likely influenced by apps and other factors -- one user noticed WhatsApp sucking 15 percent of his battery life, likely a beta bug. We'll be running our own battery of tests, as it were, but the takeaway for now? Hey, it's still a developer preview -- but we're optimistic.

In this article: AndroidL, BatteryLife, DeveloperPreview, google, mobilepostcross, OS, Volta
All products recommended by Engadget are selected by our editorial team, independent of our parent company. Some of our stories include affiliate links. If you buy something through one of these links, we may earn an affiliate commission.