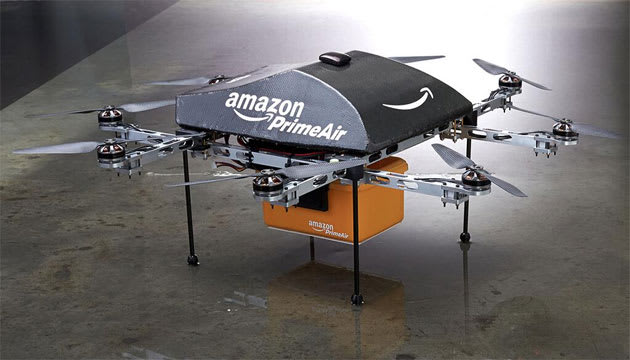 Keep laughing at Amazon's Prime Air drone delivery video if you want to (cough, Netflix), but the company is moving forward as though it's serious. Bloomberg points to a letter filed today with the FAA asking for permission to take its unmanned flying machines out of their test facility, "to do what thousands of hobbyists and manufacturers of model aircraft do every day." The FAA is still putting tight controls on the commercial use of drones, but Amazon Global Public Policy VP argues that one day its Prime Air drones will be as common a sight as mail trucks on the road are today. He says that the company's indoor tests in Seattle have brought its "highly automated" small unmanned aircraft systems (sUAS, for short) to ninth-gen vehicles -- CEO Jeff Bezos told shareholders it was on the 5th and 6th gen in April. They can travel at 50mph carrying 5 lb packages (which covers 86 percent of Amazon's deliveries) easily, and have been tested for agility, flight duration, redundancy plus other factors. The FAA has yet to respond to the petition, but who knows, maybe soon area residents can keep an eye on the sky and go Blu-ray hunting.

Source: Regulations.gov (PDF), Bloomberg
Coverage: CNET, Fortune
In this article: amazon, drone, faa, primeair, suas, TL16PrimeDrone, uav
All products recommended by Engadget are selected by our editorial team, independent of our parent company. Some of our stories include affiliate links. If you buy something through one of these links, we may earn an affiliate commission.