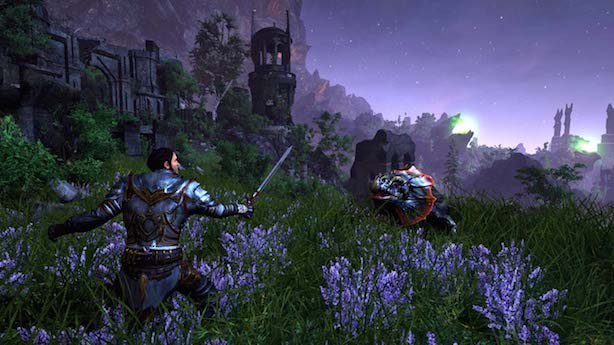 When your world's gods have bailed, how do you combat mysterious, unchecked enemies stemming from the darkness? You side with the faction called Demon Hunters, earn a bunch of skills and gear from quests and then trample everything in sight with your newly-earned power. Risen 3: Titan Lords' adventurers will have three allegiances to choose from, though Deep Silver's recent press release and accompanying batch of screens only detail the Demon Hunters.

The Demon Hunters are recovering from a bit of a slump ... okay, slump probably understates a few decades' worth of time. The point is, they're getting back together, arming themselves to restore their once-glorious citadel and reestablish fear in their enemies, which we're assuming would be the demons.

Risen 3 won't reach the Xbox 360, PS3 and PC until August 12, but you can pass some time viewing its landscapes in the gallery below, complete with twisted creatures that look like some prime prey for the Demon Hunters.
[Image: Deep Silver] Larkspur, Calif.  July 17, 2014  Deep Silver and Piranha Bytes revealed details and a new look at the Demon Hunters in Risen 3: Titan Lords, the upcoming and anticipated role playing game, coming August 12 to PC, the Xbox 360 games and entertainment system from Microsoft and PlayStation®3 entertainment system. The Demon Hunters are one of three dynamic factions populating the world of Risen 3. Players will have to choose their allegiance, which will greatly impact the quests, skill sets, armor and overall experience in the open-world role-playing game.

Forsaken by the gods, the perilous world of Risen 3 stands on the brink of ruin, its peoples threatened by a mysterious menace from the darkness. But dark knights are regrouping, driven by ancient convictions and equipped with the best weapons and armor mankind has to offer: the Demon Hunters. At one time a dedicated and privileged cult, this reclusive sect has all but sunk into oblivion over the course of centuries.

Everyday, the decay of their citadel reminds the Demon Hunters of their negligence over the past decades. Eager for battle, now they face the dark menace, ready to revive the past and fight back the shadows with their mighty axes, hammers and swords. The time has come for them to restore the Bay of Iron and the massive citadel to their former glory and strike fear into the hearts of their enemies.

Will you side with the Demon Hunters? Explore this gorgeous handcrafted world, and choose your own fate when Risen 3 launches on PC, PlayStation®3 and Xbox 360 August 12.

Deep Silver develops and publishes interactive games for all platforms, seeking to deliver top-quality products that provide immersive game experiences driven by the desires of the gaming community. The company has published more than 200 games worldwide since 2003, including the best-selling zombie action Dead Island franchise, the critically-acclaimed Metro: Last Light and the smash hit action adventure Saints Row IV. Deep Silver is a wholly-owned subsidiary of Koch Media, GmbH, and includes the renowned development studio Deep Silver Volition, based in Champaign, IL. For more information, please visit www.deepsilver.com or follow us on twitter at @deepsilver.
In this article: deep-silver, demon-hunters, microsoft, pc, pirahna-bytes, playstation, ps3, risen-3, risen-3-titan-lords, xbox
All products recommended by Engadget are selected by our editorial team, independent of our parent company. Some of our stories include affiliate links. If you buy something through one of these links, we may earn an affiliate commission.