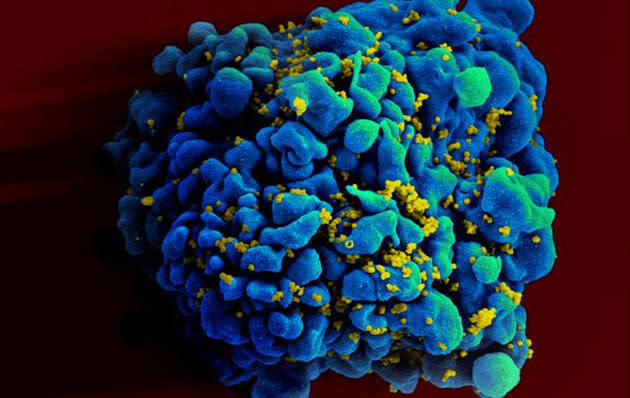 So far, HIV has eluded a cure because it installs its genome into human DNA so insidiously that it's impossible for our immune system to clear it out. While current treatments are effective, a lifetime of toxic drugs is required to prevent its recurrence. But researchers from Temple University may have figured out a way to permanently excise it using a highly-engineered HIV "editor." Here's how it works: the team analyzed a part of our immune system that fights infection and built a "guide RNA" strand consisting of 20 nucleotides (RNA building blocks). Those strands were then injected into cells typically infected with HIV, like T-cells. There, they targeted the end parts of the virus's gene and snipped out all 9,709 nucleotides that made up its genome. Since the guide RNA strand contained no human DNA sequences, it left the host cell intact -- but free from HIV.

Though scientists eliminated the virus from cultured cells, there's still a lot of hurdles to clear before such therapy is ready for human trials. The virus's highly mutative nature means that there are numerous variants that the treatment would have to remove. The other challenge is to deliver the treatment to every infected cell, since complete removal of the virus is required to cure AIDS. However, Temple researcher Kamel Khalili said that "we are working on a number of strategies so we can take the construct into preclinical studies... we want to eradicate every single copy of HIV-1 from the patent. That will cure AIDS."

In this article: AIDS, cells, genome, HIV, RNA, video
All products recommended by Engadget are selected by our editorial team, independent of our parent company. Some of our stories include affiliate links. If you buy something through one of these links, we may earn an affiliate commission.