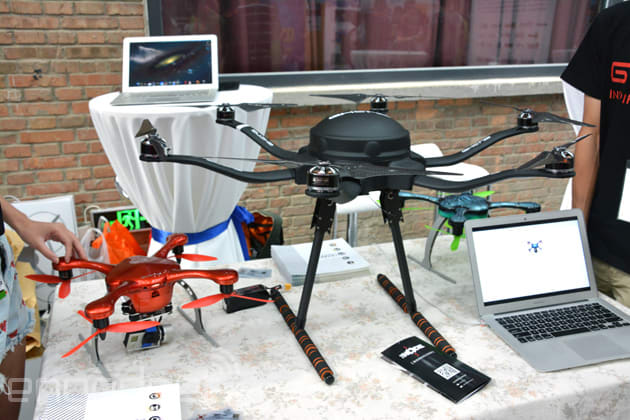 Watch out, DJI! There's a new kid on the block! At the TechCrunch Beijing conference today, fellow Chinese drone maker Ehang teased its upcoming hexacopter ahead of its Kickstarter launch next month. While the company's keeping most of the specs under wraps, the reps did reveal that this yet-to-be-named machine is very light thanks to its full carbon fiber body, and it'll manage a whopping 5km radius range with a flight time of around 30 to 40 minutes per charge. Best of all, this drone will apparently have a maximum load weight of 10kg. That's four times as much as what Amazon's delivery drone can handle, and twice that of DJI's recently launched Spreading Wings S900; but its estimated $5,000 price tag isn't as attractive.

Meanwhile, Ehang is already selling its smaller, weather-resistant Ghost quadcopter in China for a mere $550, and it can fly within a 1km radius range with up to 1kg of payload, should that interest anyone.

In this article: drone, ehang, hands-on, hexacopter, techcrunchbeijing2014
All products recommended by Engadget are selected by our editorial team, independent of our parent company. Some of our stories include affiliate links. If you buy something through one of these links, we may earn an affiliate commission.